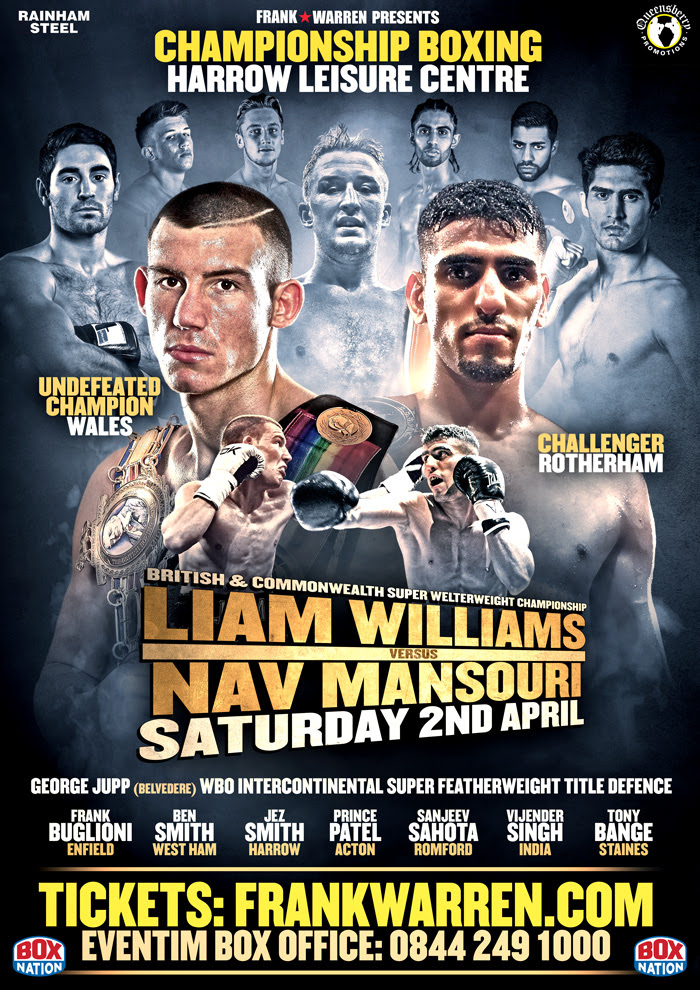 Liam Williams returns against Nav Mansouri on Saturday April 2nd at the Harrow Leisure, live on BoxNation. The power-punching Welshman headlines an quality card that also features George Jupp, the return of Frank Buglioni and Indian superstar Vijender Singh plus many more.

All-action Williams, 23, is a fast rising talent in the red-hot 154 pound division and has amassed a sizzling 13-0 record with 8 knockouts since turning professional in 2011.

After destroying Michael Lomax in November 2014 inside a round to claim the Commonwealth title, he underwent hand surgery that took a year out of his career only to return in December last year and smash Kris Carslaw in two rounds to win the vacant British title.

He was set to meet Mansouri in a defence of his titles on the Terry Flanagan v Derry Mathews undercard on the original February 13th date in Liverpool, but had to withdraw after he was struck down with a viral infection.

Now Williams is fit and ready to return and is raring to continue his three fight knockout run and make Mounsouri his fourth.

“After a great comeback against Carslaw I felt that I was on fire and ready to rip through anyone in the division starting with Mansouri but then I was hit with a virus, I was gutted, but you can’t look down and now I’m recovered and desperate to get back in the ring,”

“The rest after the hand surgery did me the world of good, although it was frustrating at the time, but I’m punching hard with total confidence and I’m not afraid to let go of my hands like I used to be in case I damaged them. I’ve matured as well in the time out and mixed with my regained confidence I’m like a new fighter,”

“As I look at Mansouri, he’s a bit wild with a poor defence that I can exploit. He’s not technically great, but he is tough and he’ll come and have a go, but I can see myself putting him to sleep when I land the first big shot.”

Chief support on the card sees Belvedere’s George Jupp, fresh from his massive upset of Mitchell Smith in December, make the first defence of his WBO Intercontinental Super-Featherweight title.

Former WBA World Super-Middleweight title challenger Frank Buglioni from Enfield returns to action for the first time since his brave attempt against Fedor Chudinov last September and begins a new campaign in the light-heavyweight division towards another world title shot.

Asian boxers are the new powerhouse in the sport and a strong contingent led by Indian superstar and Olympic Bronze Medalist Vijender Singh, plus hot Acton flyweight prospect Prince Patel, the professional debuts of amateur stars Sanjeev Sahota from Romford, and the Prince Naseem Hamed prodigy from Staines-upon-Thames Tony Bange.