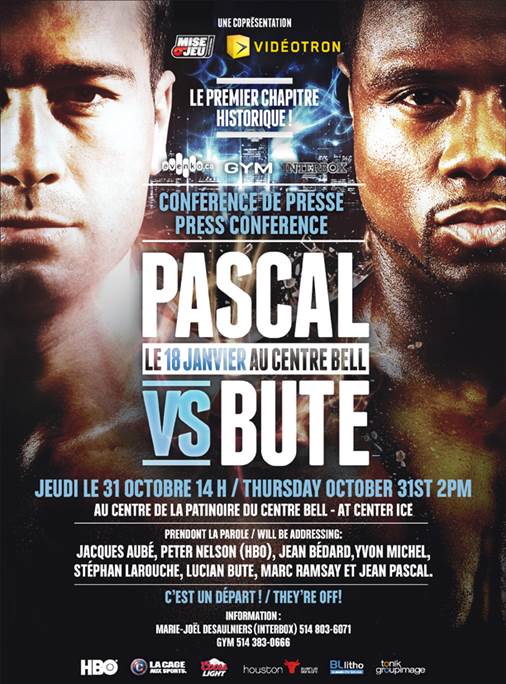 InterBox and Groupe Yvon Michel (GYM) and proud to announce the undercard bouts for the historic January, 18th 2014 Bell Centre clash between former World champions Lucian Bute (31-1-0, 24 KO) and Jean Pascal (28-2-1, 17 KO), both living in Laval, Quebec. Six fights have been added to the card that will feature three titles up for grabs.

Local blue chip prospect Eleider Alvarez (13-0-0, 8 KO), ranked #3 WBA, #3 WBO and #11 WBC, will participate in his first World title fight in the evening’s Semi Final bout. With HBO cameras rolling, the undefeated Alvarez will march into the Bell Centre ring against the very popular Thomas Oosthuizen (22-0-2, 13 KO) from South Africa. Oosthuizen, also undefeated, will step up a weight class to Light Heavyweight to challenge Alvarez over 12 rounds with the vacant WBC Silver Light Heavyweight title on the line.

Strong off a unanimous decion victory over Russian Magomed Abdusalomov on HBO, WBC #5 rated Heavyweight Mike Perez (20-0-0, 12 KO) from Cuba is set for his next challenge. Perez will be facing Cameroon Heavyweight Carlos Takam (28-1-0, 22 KO), who has made quite a name for himself in France recently with KO victories over Michael Grant and Frans Botha. Perez will have his hands full, as Takam will be looking to add a 23rd KO to his impressive record which also boasts 10 victories in a row.

Sébastien Gauthier (22-4-0, 14 KO) of St-Jerome, Quebec, always gives it his all and is never in a dull fight. His two battles with former World champions Steve Molitor and Rodrigo Guerrero both stole the show of the respective cards, Gauthier will be facing Javier Franco (20-12-2, 9 KO) from Mexico over 8 rounds, and has already let it be known that he wants to fight for a World title before hanging up the gloves. Of course, he will have to beat Franco first.

Mikael Zewski (22-0-0, 17 KO) is on quite a tear, having won 12 of his last 13 fights by stoppage. Quebec and Montreal fans don’t get to appreciate his boxing skills for too long, as Zewski takes care of his opponents early. Fresh off his TKO victory in 3 rounds vs. Ryan Davis in Quebec City last November 30th, Zewski is ready for his next challenge. Zewski’s opponent will be confirmed by Top Rank shortly.

With all the Light Heavyweight action in Quebec the last few months, former amateur standout Artur Beterbiev (3-0-0, 3 KO) finds himself in the right place at the right time. Beterbiev will be looking for his 4th consecutive KO victory over experienced journeyman Gabriel Lecrosnier (16-24-3, 1 KO) of France. Gabriel was selected for one reason only: To give Beterbiev some much needed rounds!

Oscar Rivas (12-0-0, 7 KO), who won the Silver Medal at the Pan-American Games as an amateur in 2007, will be looking to restart his professional career against Quebec « tough guy » Eric Barrak (7-1-0, 6 KO). Oscar, who has been forced out of the ring since December 2012 with an eye injury, is now fully recovered and very anxious to continue his ascension up the Heavyweight ranks. Barrak, who boasts 6 KO’s in 7 fights, will be looking to make a real name for himself by beating Oscar.