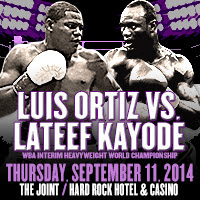 Unbeaten heavyweights Luis Ortiz and Lateef Kayode will meet at The Joint at Hard Rock Hotel & Casino to battle for the vacant WBA Heavyweight World Title (a title that’s absolutely worthless by any measure) in the main event of Golden Boy Live. The fight will be held on Thursday, September 11, just two days Before”MAYHEM: Mayweather vs. Maidana 2″ takes over Las Vegas on Saturday, September 13.

“The heavyweight championship has long been the most prestigious title in all of boxing and Luis Ortiz and Lateef Kayode will be bringing it in order to win that belt and put their names in the history books,” said Oscar De La Hoya, President of Golden Boy Promotions. “This is the perfect way to kick off a great weekend of boxing in Las Vegas.”

Despite that comment from De La Hoya, it should be noted that neither Ortiz nor Kayode are in the top 10 of the heavyweight division. Wladimir Klitschko is the division’s champion, and already holds one WBA version of the belt as well, making this “championship” even more laughable than the fraudulent one produced from the Stiverne-Arreola fight.

“We are happy to work with Golden Boy to continue the tradition of not one but two fights in Las Vegas the week of a Floyd Mayweather pay-per-view event,” said Leonard Ellerbe, CEO of Mayweather Promotions. “We want to keep the fans who come from near and far entertained all week long and there is no better way to do that than with a heavyweight title fight.”

“A lot of great fighters have come before me and won the heavyweight title and to have the chance to join them is an honor,” said the number two-ranked Ortiz. “I will fight my heart out for this championship and I won’t disappoint my fans, friends or family.”

“I’ve waited a long time for a fight like this and I feel that this is finally my chance to shine,” said the number five-ranked Kayode. “Before Mayweather and Maidana fight on Saturday, I will set the stage for them with a big win and a championship that will have the world talking.”

With over 340 amateur wins in his native Cuba, 35-year-old Luis Ortiz (21-0, 18 KOs) knows more about boxing than practically anyone in the heavyweight division as evidenced by his 21 wins. Now the 6-foot-4 southpaw has his shot at championship gold and after back-to-back knockouts of Alex Gonzales and Monte Barrett respectively, it’s clear that the Miami resident isn’t content with just winning a decision on September 11.

A native of Lagos, Nigeria who now makes his home in Hollywood, California, 31-year-old Lateef “Power” Kayode (20-0, 16 KOs) is a hard-hitting contender whose six-year professional career includes wins over Matt Godfrey, Felix Cora Jr. and Alfredo Escalera Jr., as well as several regional titles at cruiserweight. Now competing at heavyweight, where he has knocked out his last two opponents, Kayode is one win away from becoming a world champion.