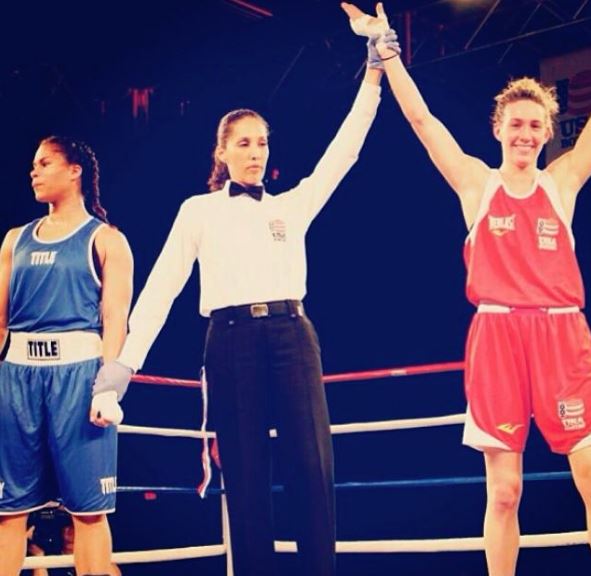 Boxing fans and tournament participants have all been looking forward to Friday’s semifinal bouts throughout the week of competition and the day’s action did not disappoint. The semifinal round marked the tournament debut for all three 2012 Olympians as well as multiple reigning champions, and both the veterans and previously unheralded competitors put on a show.

2012 Olympic bronze medalist Marlen Esparza (Houston, Texas) set the tone for her Olympic teammates with an impressive third round TKO victory in her bout with Katie Durgin (Boston, Mass.). Esparza gave Durgin two standing eight counts in the third round of their flyweight semifinal contest before the referee halted the bout at the 1:21 mark of the stanza. Esparza’s win sets up a rematch of the 2013 USA Boxing National Championships women’s flyweight final round bout with Virginia Fuchs (Kemah, Texas).

The two women’s lightweight semifinal contests were some of the most highly anticipated bouts in the tournament with all four competitors being former national champions. 2012 Olympian Queen Underwood (Seattle, Wash.) and 2013 USA Boxing youth national champion Rashida Ellis (Lynn, Mass.) stepped through the ropes first in an unprecedented battle between the two. It was experience over youth in the opening semifinal contest as Underwood took a split decision victory over Ellis. In the second women’s lightweight semifinal, Mikaela Mayer (Los Angeles, Calif.) faced off with former national champion Melissa Parker (New York, N.Y.) in a rematch from the 2013 National PAL Championships finale. Mayer won a 2-1 decision over Parker to set up another showdown between she and Underwood.