HBO is airing a special edition of The Fight Game to honor Muhammad Ali, and ESPN The Magazine’s tribute issue is out on stands this week as well. Here are details on both.

The Fight Game with Jim Lampley: A Tribute to Muhammad Ali an HBO Sports presentation exploring his impact on sports, culture and politics, debuts Tuesday at 11pm on HBO. 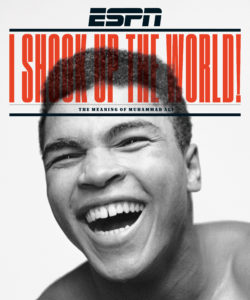 The Mag dedicates 34 pages not only to Muhammad Ali’s life but also to the multitude of ways the boxer helped define the lives of so many others. The introduction by Steve Wulf, “The Meaning of Ali,” sets up the construct of how one man could mean so much, and represent so many ideals, to so many different people. The tribute to “The Greatest” looks at the many sides of Ali with remembrances, essays, numbers, dates, photographs and his own words.

It’s tough to do justice, though, to a man who defeated not only the fiercest fighters in the world but also the even more formidable forces of convention and establishment. In his intimate portrait of Ali, William Nack recounts what the boxer said to his corner after weathering Joe Frazier’s 10th-round barrage during the 1975 Thrilla in Manila: “This must be what dyin’ is like.” But just as Ali refused to quit that night in the Philippines, he’s still answering the bell … and challenging us to give it our best shot.