A cracking looking contest at welterweight finally takes place this Saturday evening, as Vergil Ortiz Jr and Michael McKinson lock horns at the Dickies Arena in Fort Worth, Texas.

The contest was due to take place in March, only for Ortiz to withdraw with just days to spare through illness.

Ortiz Jr (18-0, 18 KOs) is one of the hottest properties in world boxing right now, and the 23-year-old Texan has made a ruthless, knockout laden start to his career.

His step-ups in class have been just as impressive, with early wins against Mauricio Herrera (KO3) and Antonio Orozco (KO6) catching the eye, but his last three wins have seen another gear reached.

Samuel Vargas was knocked out in seven in July 2020, and that was followed by claiming the vacant WBO International belt with a ruthless seventh round knockout of former world champion Maurice Hooker in March last year.

His last contest came five months later, and it was another statement, this time an eighth round stoppage of Egidijus Kavaliauskas.

For Portsmouth’s McKinson (22-0, 2 KOs), he took a while to gain real exposure, but got his chance after being drafted in as the B side in a contest in Gibraltar against Chris Kongo on the undercard of Dillian Whyte’s rematch victory over Alexander Povetkin.

The 28-year-old southpaw made the most of his opportunity, dropping Kongo in the opener on the way to an impressive points win.

’The Problem’ then won in the Matchroom back garden in August 2021, and still boxed after Ortiz’s late withdrawal, easily outscoring Alex Martin over ten.

Prediction: This is a tricky one to call, as although Ortiz Jr has been rightly built up, McKinson has to be respected, especially on recent form. The beginning could be a cagey one, and Ortiz Jr will want to maintain his knockout streak, but he may just have to settle for a first win on the cards to extend his unbeaten record.

The undercard sees a crossroads clash at welterweight. Former WBO super lightweight champion Maurice Hooker (27-2-3, 18 KOs) has been stopped twice in his last three outings, but he should have enough left to take a points win over ten against Blair Cobbs (15-1-1, 10 KOs).

There is world title action too, and Marlen Esparza (12-1, 1 KO) should be able to defend her WBC and WBA flyweight world titles with a points win over Venezuela’s Eva Guzman (19-1, 11 KOs).

At super lightweight, Alex Martin (17-4, 6 KOs), who lost out to the aforementioned McKinson last time out, can return to winning ways on the cards over eight against the vastly experienced Henry ‘Hank’ Lundy (31-10-1, 14 KOs).

Bektemir Melikuziev (9-1, 7 KOs) also appears, and he should win early against Sladan Janjanin (32-11, 24 KOs) at super middleweight in a scheduled eight rounder.

The sole six rounder should see an early win for Carlos Nava (8-0, 5 KOs) in his lightweight encounter with Rodolfo Hernandez Montoya (30-10-1, 28 KOs).

In the only four round contest at bantamweight on the bill, Figo Ramirez Gonzalez (1-0, 1 KO) should secure a second straight stoppage win over Francisco Bonilla Zambrano (6-13-3, 3 KOs). 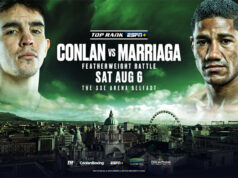