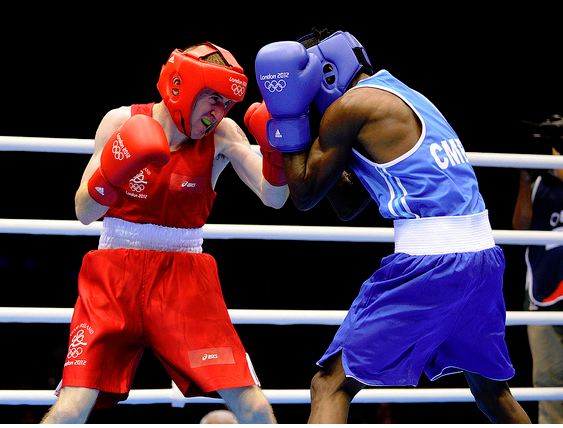 Medals were assured for the twelve winners of the Men’s Light Fly (46-49kg), Light Welter (64kg) and Light Heavyweight (81kg) quarter-finals in the evening session of day twelve of the London 2012 Olympic Games. The atmosphere inside the ExCeL arena was electric as 24 boxers took to the canvas looking to move into the last four of their respective weight categories.

In the first bout, reigning Light Flyweight (46-49kg) Olympic Champion Shiming Zou was up against 28-year-old Birzhan Zhakypov of Kazakhstan in an extremely competitive bout between two top class boxers. The 31-year-old Chinese orthodox fighter had to be at his best in the early stages, having to repel several big shots from Zhakypov to keep the scores level after the first round. The Kazak southpaw was very positive in the second but was being expertly countered by the three-time AIBA World Champion, who took the round by two points. Zhakypov continued to look for the opening, throwing several good combinations but once against the Chinaman’s precise shot selection gave him the edge as he took a 13:10 win to remain on course to defend his title. 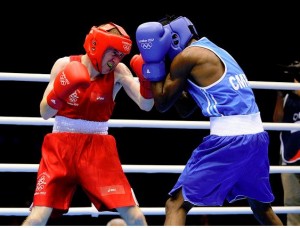 There was once again loud vocal support at the ExCeL for the charismatic Irishman Paddy Barnes as he battled the talented 20-year-old Devendro Singh Laishram of India. Some great combinations involving mixing up the hooks and uppercuts had Barnes ahead by two points coming into the second round. The experience orthodox fighter from Ireland, who won a bronze at the 2008 Beijing Olympic Games, was displaying exceptional hand speed as he peppered his opponent with an array of shots to score heavily in the second. The 25-year-old Barnes had to withstand a late surge by the promising Laishram but his defenses and swift counter-punches ensured a 23:18 victory to set up a semi-final showdown with Zou.

The Irishman declaring afterwards, “It is a dream come true to be here. I am over the moon. It was a real achievement. The fans make me proud to me Irish. Words cannot describe how I am feeling. I knew he would come forward all guns blazing. It was really nerve wracking, but I dug deep and just got on with it”.

Russian third seed David Ayrapetyan looked in fine form as he came up against Ferhat Pehlivan of Turkey in the third Light Flyweight (46-49kg) bout of the session, making his speed count against his taller opponent. The 28-year-old Russian southpaw was too quick, too agile and had seemingly a lot more energy than the static Pehlivan, as time and time again he threw some hard one-twos without any response to take the first two rounds. Ayrapetyan, who won bronze at the last AIBA World Championships and silver at the one before that, threw some exquisite punches, with that right hook scoring vital points as he claimed a well-taken 19:11 win.

Disputing the last available spot in the Light Flyweight (46-49kg) semi-finals were 32-year-old Thai Kaeo Pongprayoon and Aleksandar Aleksandrov of Bulgaria. An even first round saw both experienced boxers trade punches in the center of the ring but with nothing to separate the two, the points were shared. It was more of the same in the early stages of the second before Pongprayoon moved downstairs to work the body and as he connected with some good punches, he took the round by two points. The orthodox fighter from Thailand continued to dictate the exchanges in the third, throwing some good penetrating straight one-twos on his way to a 16:10 triumph.

In the first of the Light Welterweight (64kg) bouts, 2009 AIBA World Champion Roniel Iglesias Sotolongo, who had eliminated the top seed in the previous round, faced Uktamjon Rahmonov of Uzbekistan. Rahmonov began on the front foot, making that big left hand of his count on more than one occasion as he took the first round. The Cuban southpaw awoke from his slumber to find his rhythm in the second, unloading several stinging shots with Rahmonov having to take a standing eight count, to storm into a six point lead going into the final round. Iglesias Sotolongo held strong as the 21-year-old Uzbek tried to mount a comeback and moved into the semi-finals with an impressive 21:15 victory.

Iglesias Sotolongo told the press, “I am really happy but we prepared well for this. The first round went in his favour. I had never fought him before so I had to wait and weigh him up. But in the second round all that hard preparation came into play and I stayed focused. It was a very difficult fight. He was very coordinated and a hard puncher”.

21-year-old Kazak Daniyar Yeleussinov, the 2012 Asian Games winner, locked horns with Vincenzo Mangiacapre in an intriguing contest between two accomplished boxers. The Italian AIBA World Championships bronze medallist showed great movement and good variation in his shot selection to take the first two rounds. The fourth seeded Mangiacapre showed once again his experience against a taller fighter, patiently waiting for his opponent to commit before unloading some hard hits as he took the final round and with it the bout 16:12.

There was once again a huge reception reserved for the home boxer as Thomas Stalker made his way into the ring to face 30-year-old Munkh-Erdene Uranchimeg of Mongolia. In a first and furious first round, the two southpaws were evenly matched, trading lots of punches as the high-scoring first round was shared. The 28-year-old AIBA World Championships bronze medalist was struggling to get to grips with the speedy Uranchimeg, who was throwing a lot of punches and moving well, the Mongol taking the round by a point. It was a tense finale as both went in search of the win, Stalker trying to impose himself on his fast-moving opponent who was countering well. In the end, Uranchimeg held on to knock the third seed out of the competition with a 23:22 victory.

Looking to book their place in the final Light Welterweight (64kg) quartet were Australia’s Jeff Horn and second seed Denys Berinchyk. The Ukrainian orthodox 24-year-old AIBA World Championships silver medalist was really in the mood for this one, constantly moving forward with the jab before looking to unleash with that thunderous overhead right of his. Berinchyk was calm and collected throughout the three rounds as he landed some serious blows to inflict a comprehensive 21:13 defeat on the relatively inexperienced Australian.

Top seed and favorite Julio la Cruz Peraza was up against Brazilian southpaw Yamaguchi Falcao Florentino in the first of the Light Heavyweight (81kg) contests. The elegant Cuban could not find an opening in the first round as Falcao Florentino held firm and threw some good combinations on the counter to draw the round. The reigning AIBA World Champion la Cruz Peraza was dancing and weaving, looking to dictate but found in his path the inspired Brazilian, who was countering to perfection to edge the second round by a point. 24-year-old Falcao Florentino was boxing out of his skin and his clever game plan continued to work as he took the final round to win the contest 18:15. La Cruz Peraza showed his class by warmly congratulating the winner after the result was announced.

On being one of the first brothers for more than 30 years to win boxing medals at the same Olympic Games (Esquiva is guaranteed at least a bronze at Middleweight), Falcao Florentino stated, “It is thanks to my father Moreno that we have got to this stage. I knew that this day would come. We have two medals for Brazil, not only for us. We also we did it for the sport of boxing in our country. This is a great accomplishment. I cannot wait to celebrate this achievement with my brother”.

AIBA World Championships bronze medalist Elshod Rasulov from Uzbekistan battled fourth seed Egor Mekhontcev to decide who would face Falcao Florentino in the semi-finals. The Uzbek orthodox 26-year-old took the initiative in the first; throwing some good punches to edge it by a point. The taller Mekhontcev came back in the second, landing some heavy blows, one straight in particular hurting his rival. In the third, the Russian 27-year-old European Champion began to dominate with some vicious hooks scoring vital points as he went on to record a 19:15 victory.

Adilbek Niyazymbetov of Kazakhstan was pitted against Iranian hardman Ehsan Rouzbahani in the penultimate Light Heavyweight (81kg) contest of the session. The third seed has too much in his locker, and although he took a standing count in the second round, Niyazymbetov dominated each round to win 13:10.

Carrying the hopes of his nation, Algeria’s Abdelhafid Benchabla, who qualified for these Olympic Games by being victorious in the 2011 World Series of Boxing Individual Championships, boxed the tall Oleksandr Gvozdyk of Ukraine for the last Light Heavyweight (81kg) semi-final place. The speed of the 26-year-old Algerian orthodox was causing Gvozdyk quite a few problems in the first round, and as a result Benchabla took a two point advantage into the second.

The Ukrainian mounted a good comeback, getting right up close to his rival, going toe-to-toe with him to claw his way back into the contest to go into the final round level on points. A frustrated Benchabla was now throwing a lot of wild punches and Gvozdyk’s more measured approached had him confidently landing some hard straights with the Algerian taking two standing eight counts after being on the receiving end of some powerful rights. The Ukrainian ensured his place in the last four after winning 19:17.