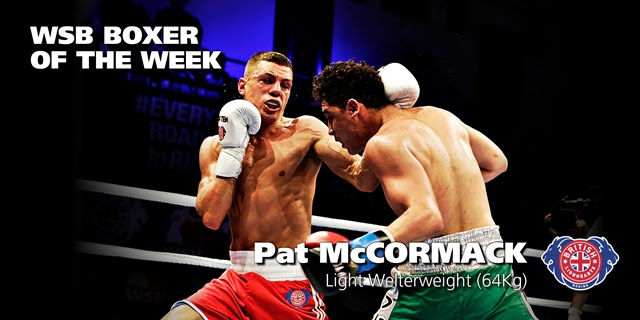 Following another triumphant WSB display from the team on 18 February, British Lionhearts’ Pat McCormack has been named Boxer of the Week for Season VI Week 6. The light welterweight saw off the challenge of Mexico Guerreros’ Rio 2016 qualifier Raul Curiel to give the home side an unassailable 3-0 lead and help make it three wins from three so far this campaign.

Pat McCormack was born in Sunderland in 1995, where he trains alongside his twin brother Luke at the Birtley Boxing Club under coach Graeme Rutherford. In 2010, McCormack took his first national title at junior level, following it up with a first international gold at the European Junior Championships in Hungary a year later.

The rapid ascent to the top of the junior level was completed when McCormack travelled to Astana, Kazakhstan for the 2011 AIBA Junior World Boxing Championships, where he beat India’s Naveen Kumar to take the gold.

English and British youth titles followed in 2013, leading to a call up for the national elite squad and a return to Kazakhstan where McCormack won both his contests against strong Russian and Uzbek rivals. A first national elite title came in 2014 and a place on the team for the Commonwealth Games, where he was part of one of the bouts of the tournament against Welsh star Joseph Cordina, ending in a narrow defeat.

Moving up to light welterweight in 2015, McCormack grabbed silver at the prestigious Bocskai Memorial Tournament and secured another national title before a brilliant run at the European Confederation Championships in Bulgaria was only halted by Russian World Champion Vitaly Dunaytsev in the gold-medal bout. The result led to a place at the AIBA World Championships in Doha, where the Russian star once again stopped his title chase.

McCormack opened his WSB campaign this year with a spectacular triumph over USA Knockouts’ young Gary Russell in Miami, but it was the Week 6 match-up against Mexico Guerreros Raul Curiel that proved the real test of how far the 20 year-old has come. The unanimous judges decision in the Brit’s favour after five rounds against Mexico’s Olympic hopeful will have given McCormack a real taste of what he has to do to get to Rio and push for a podium finish.

Team of the Week Week 6

No doubt British Lionhearts deserve the title of Team of the Week for the second time in Season VI of World Series of Boxing after their thrilling match against Mexico Guerreros in their return to legendary London’s York Hall.

Punch of the Week Week 6

Joselito Velazquez, from Mexico Guerreros, was impressive during the start of his bout against Galal Yafai from British Lionhearts. Even if the Mexican flyweight had to stop the match in round 2 due to an injury, he received the honor of the punch of week 6.

Also, some updates from AIBA…

The 8 commissions gathered in Manchester this week to discuss three crucial issues facing the sport: headguard removal, competition structure and pro-eligibility. The discussions were held in the spirit of the innovative HeadsUp! campaign, the ongoing initiative launched in 2015 to propagate a greater responsibility for the health of AIBA boxers and the nurturing of their careers from inception through to retirement and beyond.

“AIBA’s 70th year is the perfect time to rejuvinate the annual meeting of our commissions. The topics under debate and discussion affect every level of our sport so it is vital that all of our commissions are heard on these crucial issues. The HeadsUp campaign has made important inroads and we look forward to acting on the valuable opinions we have heard over the past days here in Manchester”, said AIBA President Ching-Kuo Wu after addressing the 110 attendees.

The annual meeting took on a revitalised tone this year, with greater emphasis placed on improving dialogue and the percolation of information through all levels of the sport. The simple idea behind heightened engagement and participation of the commissions is to yield more information on the impact of the three topics under discussion for coaches, boxers and R&Js, take their feedback onboard and use it to come up with concrete solutions.

“These last 2 days are true evidence of the vitality of our sport and the commitment of the AIBA family behind the new initiatives proposed. Each 8 commissions worked for the 1st time under the HeadsUp framework allowing each member to openly discussed and contribute to the continuous growth of our sport”, explained Karim Bouzidi, AIBA executive director.

As well as the commissions giving their thoughts on headguard removal, competition structure and pro-eligibility, there will be cross-commission discussions on the topics for the first time. The improved flow of information and discussion is designed to give a greater openness and understanding of the changes taking place in boxing, and to influence the ways in which those changes could take effect.

“The level of communication at this year’s commission meetings has been very positive for us. By empowering the full chain of commissions you inevitably get better input, and from there we will see better results, and changes that have a wider understanding and approval than ever before”, Chair of the Women’s Boxing Commission Joyce Bowen said after the event.

Paul Porter, CEO, England Boxing said: “It has been a great honour to host the 2016 Joint Commissions Meeting and play a part in the on-going development of the sport. We look forward to building ever closer links with AIBA and making a significant contribution to the future progress of the sport at all levels.”