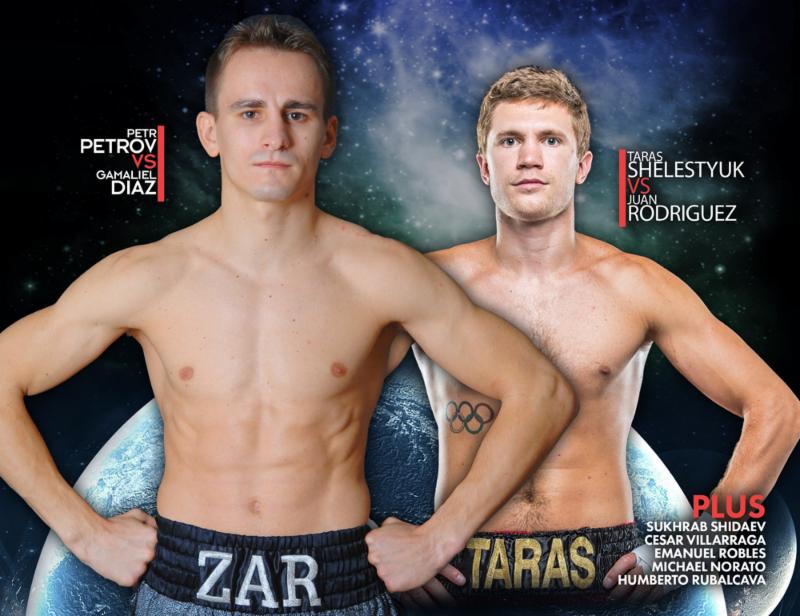 On Friday April 3rd, Petr Petrov will take on former tilist Gamaliel Diaz in a 10-round fight that will headline an ESPN “Friday Night Fights” card from the Omega Products Outdoor Arena in Corona, Calif.

In the 8-round co-feature, 2012 Olympic Bronze medalist Taras Shelestyuk will make his national television debut against Juan Rodriguez Jr. Shelestyuk is co-promoted by Thompson Boxing and Banner Promotions.

Petrov, of Madrid, Spain will be defending his NABO and NABA titles, and has a record of 35-4-2 with 17 KOs. He is the Boxcino 2014 Lightweight champion winning fights over Fedor Papzov, Chris Rudd, and a title winning eighth round stoppage over Fernando Carcamo in the finals that took place last May.

Diaz, a Mexican City-native, has a record of 38-11-3 with 17 KOs and is the former WBC Super Featherweight world champion.

Diaz won the WBC Super Featherweight world title with a twelve round unanimous decision over Takahiro Ao in October 2012, in Ao’s home country of Japan.

Shelestyuk of Sumy, Ukraine was a 2012 Olympic Bronze Medal winner. The twenty-nine year old has a record of 11-0 with 8 KOs, and has a big win over previously undefeated Travis Hanshaw two years ago.

Shelestyuk moved to Los Angeles and trains at the Wild Card Gym and is trained by Hall of Fame trainer, Freddie Roach.

Shelestyuk has stopped his last two opponents, most recently a third-round knockout over Francisco Reza just four weeks ago.

Rodriguez of Union City, New Jersey has a record of 12-1 with 5 KOs.

“We expect tremendous performances from both Petr Petrov and Taras Shelestyuk,” said Alex Camponovo, matchmaker and general manager for Thompson Boxing. “They have crowd pleasing styles that make for exciting fights, which the fans in attendance and those watching on ESPN will absolutely love. Plus, the outdoor setting at Omega Products Arena is among the finest in boxing.”

Said Banner Promotions President Artie Pelullo, “We look forward to a great night of boxing. We expect Petr to come through with a great performance against a former world champion in Gamaliel Diaz which will catapult himself to a world title opportunity. We are also pleased to give Taras his national television debut and we know based on his style and personality that he will quickly become a fan favorite and major player in the 147 pound division.”

Also on the card, undefeated welterweight prospect Sukhrab Shidaev (12-0, 7 KOs) of Hollywood, Calif. will fight an opponent to be named later (6-rounds).

Former Colombian Olympian and undefeated lightweight Cesar Villarraga (6-0, 4 KOs) will look to stay unbeaten against an opponent to be named later (6-rounds). Villarraga is promoted by Thompson Boxing and Gary Shaw Productions.

Humberto Rubalcava will also step inside the squared circle for the first as a professional. Rubalcava, a super bantamweight from Riverside, Calif. will face an opponent to be named later (4-rounds).