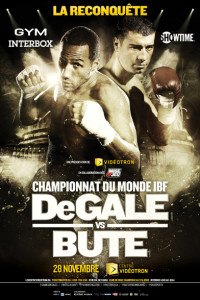 In the SHOWTIME CHAMPIONSHIP BOXING co-feature, No. 2 IBF light heavyweight Artur Beterbiev (9-0, 9 KOs), a former two-time Russian Olympian living in Montreal, will face an opponent to be announced.

Chilemba, who is based in South Africa, has won four consecutive fights, including a 10-round decision over Vasily Lepikhin in his last outing last March 14 in Montreal.

The Montreal-based Alvarez has fought all but one of his 18 pro fights in Canada. He’s coming off a 12-round decision over Isidro Ranoni in a WBC Silver 175-pound title fight last Aug. 15 in Montreal.

“I am excited to face an elite fighter like Lucian, who was champion for five years.

“He is still a good boxer and he told me he wants the belt back. But trust me; I am too young, too fresh and just too good.

“The way I’m feeling, mentally and physically, I’m in fantastic shape. It’s going to be very hard to beat me.

“My journey is only just starting, his is about to end in November.

“The way I am training, nobody will beat me. You can see my character just by the fact I accepted to come here and take that fight. Be ready for a furious and spectacular fight.

“There is no one in this division who can beat me. I’m willing to box anyone. I want to fight all the big fighters in the biggest fights.”

“I am really happy to be back in Quebec City. Some of my best memories are here. I won four fights here. Six years ago, Nov. 28, 2009, the same day I will fight James DeGale, I knocked out Librado Andrade. And I also defeated Glen Johnson in Quebec City.

“DeGale is a great champion, but to come here to face me in my hometown, in front of 15,000 people, it won’t be easy for him. I am the challenger, I am the underdog, and he is the champion, but the pressure is on him.

“The past is in the past. I feel fresh. I have a new team and different people behind me. This opportunity is huge for me.

“I had the belt for five years and on Nov. 28, I will be the new world champion. I am very confident about this.

“I dealt with this when I faced Carl Froch in England.

“My dream is to regain my world title. I always believe in myself and in my tools. The belt will remain in Quebec.”

“My job is simple: I have to prepare Lucian to win the title. British fighters were always dominant in the 160-pound and 168-pound divisions.

“DeGale is explosive, he won at the Olympic Games in 2008, and a World Championship in the United States, but that won’t work Nov. 28.”

“James is different. He did everything on the rough path: being an Olympic champion, winning the British title in his ninth fight and becoming world champion in the United States. The more pressure he has, the better he is.

“I never knew anybody like him before. He can’t be intimidated. James respects Bute, but they say when you win a title, you get better. It will be frightening.”

“It’s going to be a fun night. I have two great defining moments in my 10 years in the boxing world. The first one was Oct. 19, 2007, when Lucian became world champion live on TVA (Quebec TV channel) and Nov. 28, 2009, in front of a jam-packed crowd of 16,000 fans at the Québec Coliseum when Lucian beat Librado Andrade. Now, six years later, we are ready for a historic date.”

“No champion in Quebec’s boxing history ever regained a world title after losing it. The task will be hard because DeGale is very skilled and brave. He won his title in the United States, far from his home. Still, we root for Lucian Bute 100 percent. We have a 12,000-seat stadium configuration in the brand new Vidéotron Centre and we had already brought more people before for some of Lucian’s fights. We are convinced that Quebec’s boxing fans will also root for Lucian.”