Stiverne vs. Wilder Tale of the Tape Photo & Stats 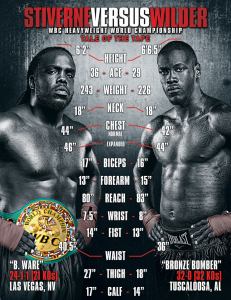 Many of the aforementioned fighters competed in an era when heavyweight was boxing’s glory division, when the saying “as the heavyweights go, so goes boxing” was never more meaningful or valid. Champions rarely ducked challengers and title belts often exchanged hands. The fighters of yesteryear, as colorful as they were crowd-pleasing, often made for thrilling, unforgettable fights.

On paper, Stiverne-Wilder figures to be as explosive as it gets; both possess dynamite in each mitt. So which fighter’s bone-crushing power is superior? Who can stand up to whose punch?

“I really don’t feel any emotions towards Deontay Wilder. The most important thing is for me to defend my world title.

“All the trash talking that he does doesn’t worry me. He doesn’t have anything that I want. I am the champ. This is fighting, this is boxing, this is for real. I keep my concentration on the fight.

“I’m here to fight for the people. I fight to inspire people anywhere in the world, that’s my responsibility since I am the world champion.”

“I need to let this beast inside of me out. I am so ready for this fight. We are bringing back the heavyweight division.

“Once I knock this guy out it will be on to the next guy for me. He will definitely go down, I’m going to hurt him bad.

“He has never faced someone with my athletic skills. My athleticism alone is going to hurt him.

“There is no better place to have a fight of this magnitude than in Las Vegas. The fight will be explosive, exciting and I will be bringing this heavyweight belt back to America.

“When you have so much animosity towards someone it makes for a great fight. Everything that I’ve said about him and all he has said about me will be settled on Saturday.”

“I am always prepared going into every fight. I never underestimate any fighter because those are the ones that can hurt you.

“When you give them the opportunity they come prepared and hungry because they want to take the title away from you.

“Any fighter is dangerous in the ring; one punch could change a fight. Ruiz is a good fighter.

“I trained really hard for this fight as I always do. I am mentally and physically strong, and I’ve been working much more on my power heading into this fight.”

“I am very excited to be here. I promise you, come Saturday you will have a new world champion.

“I am motivated and looking forward to this fight. It’s an honor for me to be here and I am grateful for the opportunity.

“He’s [Santa Cruz] a fighter that we’re well aware of. I know his style and the way he fights but we’re ready and prepared to win.

“He is an explosive fighter and so am I. I don’t think either fighter has an advantage over the other. I think you’re going to see two strong Mexican fighters going at it, it’s going to be an exciting fight.”

“Boxing is what I do and we’re ready. All that matters is that I get the victory, but I definitely want to win impressively.

“I have big things lined up for 2015, but I need to first take care of business on Saturday.

“[Maldonado Jr.] is no pushover. I don’t look over any fighter. I take everybody seriously.”

“I am very confident going into this fight. This has been my best training camp that I have had in my professional career, I’m ready.”

“This is the biggest fight I have ever been in and my best opportunity to prove that I belong and get exposure.

“I know that [Imam] was an Olympic alternate, he’s a good fighter. People are underestimating me, so I’m going to go in there and knock him out.”

“This is the heavyweight title fight. We are bringing Las Vegas back again.

“We are happy to be back at the world capital of boxing. The current Mike Tyson, Bermane Stiverne, will be defending his world title here at the MGM Grand Garden Arena. If Bermane wins, we’re going to bring Tyson back out of retirement to fight him. This fight is the ‘Return to Glory.’ Boxing goes as the heavyweights go, and the heavyweight division is back. This is one of the biggest fights we have had in years.”