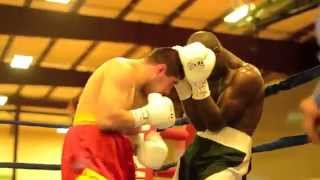 Salita’s Promotions is excited to announce another future star has been added to their roster. Opponents who will be getting in the ring with Bakhtiyar Eyyubov may not be so excited, because the prospect is by all accounts a power hitter.

Eyubov, 5-0 as a professional, with five knockouts to his credit, comes from Kazakhstan, the same homeland as middleweight superstar Gennady Golovkin. Like Golovkin, Eyyubov looks to remove the judges from the equation. Indeed, he gets going from the opening bell, as four of his five KOs have come in round one.

With over 150 wins in the amateurs, a vast majority by KO, it is clear that his style will fit into the pros quite well, and Salita is excited to let New York City-area sweet science fans check him out in the near future.

Eyubov has already enjoyed a reputation as a fearsome banger, so he’s had to agree to fights from 147 pounds all the way up to light heavyweight, 175 pounds, to entice foes to glove up with him. The 28-year-old hitter is summed up thusly by promoter Salita: “He is an aggressive body puncher and aims to get the KO every time. Eyubov has an exciting style and he is very hungry to climb to the top and be a world champion.”

Salita will soon announce his next fight card, and when we can see the talents of the prospect Eyubov for ourselves.