As 2019 comes to a close, we take a look at the success stories from the past twelve months. Here, we look at our trainer of the year, and a Briton takes the prize after a superb period of successes during the year.

Shane McGuigan has had a stellar year with some big moves made by his fighters, and deservedly takes his place as the trainer of the year for us. Most notable is the work he has done with Josh Taylor, who he has tutored since his professional debut in June 2015, and this year has seen a real breakout for the Prestonpans native alongside his trainer.

Shane was the 2016 Boxing Writers of America Trainer of the Year, following his impressive guidance of Carl Frampton, who won World super-bantamweight and featherweight titles under McGuigan. This also lead to work alongside David Haye in his heavyweight return after a three and a half year absence.

2019 saw Taylor first win the IBF super-lightweight title in May, with a thrilling win over Ivan Baranchyk in front of a raucous Glasgow crowd. “The Tartan Tornado” dropped the tough Belarussian twice, before grinding his way to a points win in a tough contest.

He then put his belt on the line, as well as his unbeaten record, in the final of the World Boxing Super Series against fellow unbeaten WBA champion, Regis Prograis, at the O2 Arena, London in October. Taylor started as marginal underdog, but, in one of the fights of the year, the Scot took a majority decision win in a classic that could have gone either way. 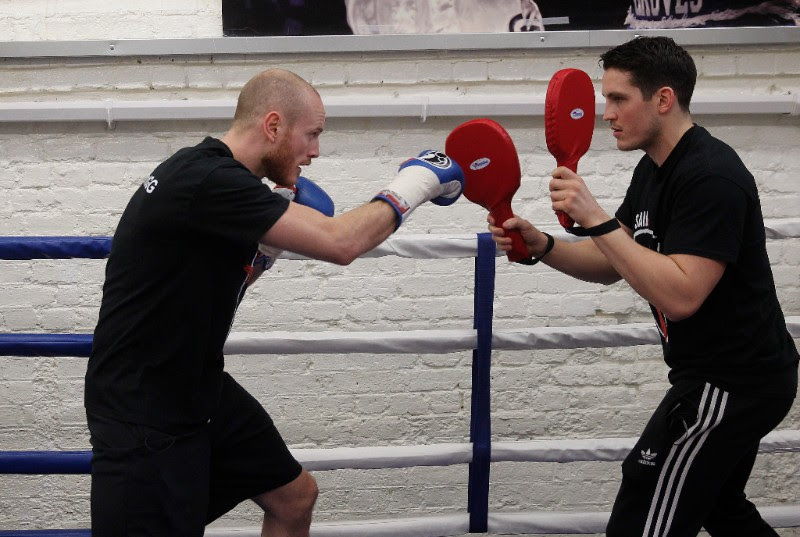 Shane also began to work with Lawrence Okolie in the summer, and guided the talented cruiserweight to a seventh round stoppage of Mariano Angel Gudino in July, and then to the European title with a seventh session stoppage of the unbeaten Belgian, Yves Ngabu, the same night that he masterminded Josh Taylor’s famous win.

There have been some setbacks in 2019 though for McGuigan, but Luke Campbell was brave in defeat against Vasyl Lomachenko in August, and remains high up the WBC lightweight rankings, with a possible title shot mooted for 2020.

Chris Billam-Smith also lost his unbeaten record in a thriller with Richard Riakporhe in July, but returned to win the vacant Commonwealth cruiserweight belt last month against Craig Glover, stopping the Liverpudlian impressively inside five rounds.

2020 will see McGuigan’s charges take on even bigger challenges, but there are no end of fighters queuing up to work with the talented trainer.

Manny Robles must be commended for masterminding Andy Ruiz Junior’s victory over Anthony Joshua in June, in what was one of the biggest shocks seen for many years to acquire major heavyweight gold.

By the same token, Rob McCracken deserves praise for executing a perfect rematch game plan after taking much criticism from the media and Social Media in the wake of Joshua’s shocking defeat in his first meeting with Ruiz. Joshua boxed smart in their second clash, staying out of trouble in the main and dominating the action for redemption and a wide points win.

Buddy McGirt was excellent in getting Sergey Kovalev back to his boxing skills, regaining his WBO light-heavyweight title in February, and then knocking out Anthony Yarde in August with McGirt threatening to pull his charge out of the contest. Kovalev also put up an excellent display in defeat to Saul Alvarez last month. McGirt has also had to contend with tragedy, with Maxim Dadashev losing his life after Buddy made the compassionate decision to pull his man out of his contest with Subriel Matias. Dadashev was unhappy with his coach’s decision, but McGirt wisely threw the towel in, and the Russian sadly collapsed and passed away post fight.