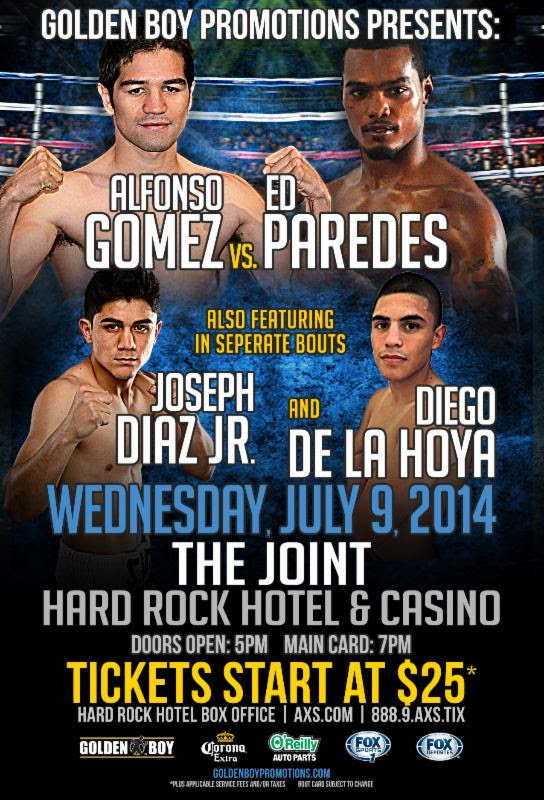 Unbeaten Southern California prospects Santiago Guevara, Oscar Negrete and Joey Gonzalez will make the trip to The Joint at Hard Rock Hotel & Casino in Las Vegas on Wednesday, July 9 when they compete in separate bouts on the Golden Boy Live! undercard aired on FOX Sports 1 and FOX Deportes. The event is part of a mega-fight week capped off by the highly anticipated junior middleweight bout between Mexican superstar Canelo Alvarez and Erislandy “The American Dream” Lara on Saturday, July 12.

In the Golden Boy Live! main event on it’s the return of former world title contender Alfonso Gomez as he battles Ed Paredes in a 10-round junior middleweight bout. Plus, 2012 United States Olympian Joseph “JoJo” Diaz competes in his first 10-round featherweight bout against Guanajuato up-and-comer Ramiro “Zurdo” Robles and 19-year-old phenom Diego “The Golden Kid” De La Hoya risks his unbeaten record against veteran Miguel Tamayo in a six round junior featherweight.

“This is the perfect treat for the fight fans in Las Vegas and we’re bringing an action-packed show to FOX Sports 1 and FOX Deportes viewers,” said Oscar De La Hoya, president and founder of Golden Boy Promotions. “Ed Paredes can make a big move up the rankings if he can get by the always-dangerous Alfonso Gomez and in Joseph Diaz Jr. and Diego De La Hoya, we’re getting a look at the future of this great sport, but they’ll be tested in their fights.”

U.S. Olympian Joseph Diaz Jr. (11-0, 7 KOs) has used his immense talents to impress the boxing world since the London Games. The 21-year-old from South El Monte, Calif. has shown maturity beyond his years along the way. Diaz is coming off of a shutout win over the 50-fight veteran Luis Maldonado in April. Diaz will stay busy in a 10-round featherweight bout against fellow prospect Ramiro “Zurdo” Robles (11-1-1, 6 KOs) who has compiled a seven-fight win streak heading into this bout. Like his opponent, the Guanajuato southpaw is 21 years old and hungry to make an impression in his United States debut.

Nineteen-year-old Mexicali phenom Diego De La Hoya (5-0, 3 KOs) is starting to garner the buzz once heard by his cousin, newly inducted Hall of Famer Oscar De La Hoya. Looking to stay active in 2014, “The Golden Kid” will be making his fourth appearance in the ring since February. On July 9, De La Hoya will look to keep his win streak alive when he faces Ciudad Obregon’s Miguel Tamayo (14-8-2, 12 KOs) in a six-round junior featherweight matchup. Coming off of a tough loss to top contender Gary Russell Jr., Tamayo hopes to get off to a fast start against De La Hoya and with 11 of his knockouts coming in four rounds or less, he has the tools to pull off the upset.

In a six-round lightweight rematch, Los Angeles’ Santiago Guevara (7-0, 3 KOs) returns to the ring for the third time this year when he faces Las Vegas’ own Rocco Espinoza (4-8). Guevara came out on top of a four-round split decision win over Espinoza in January, but this time around, Espinoza vows to even the score, while Guevara looks to keep the judges out of it.

A former amateur star in Colombia who now makes his home in Los Angeles, unbeaten Oscar Negrete (5-0, 1 KO) has impressed fans with his ring savvy and championship potential. On July 9, he will face Carlos Medina (1-0) of Nayarit, Mexico in a four-round junior featherweight bout. In the opening bout of the evening scheduled for six rounds in the featherweight division, Glendora’s Joet Gonzalez (7-0, 1 KO) faces off against San Diego’s David Clark (6-3, 4 KOs).

Gomez vs. Paredes is a 10-round junior middleweight bout presented by Golden Boy Promotions and sponsored by Corona and O’Reilly Auto Parts. The Joint doors will open at 5:00 p.m. PT and the first fight begins at 5:15 p.m. PT. The FOX Sports 1 and FOX Deportes broadcast airs live at 10:00 p.m. ET/7:00 p.m. PT.

Tickets, priced at $95, $65, $35 and $25, not including applicable service charges and taxes, are on sale now and available for purchase by visiting The Joint box office, calling 888.9.AXS.TIX or online at www.axs.com.