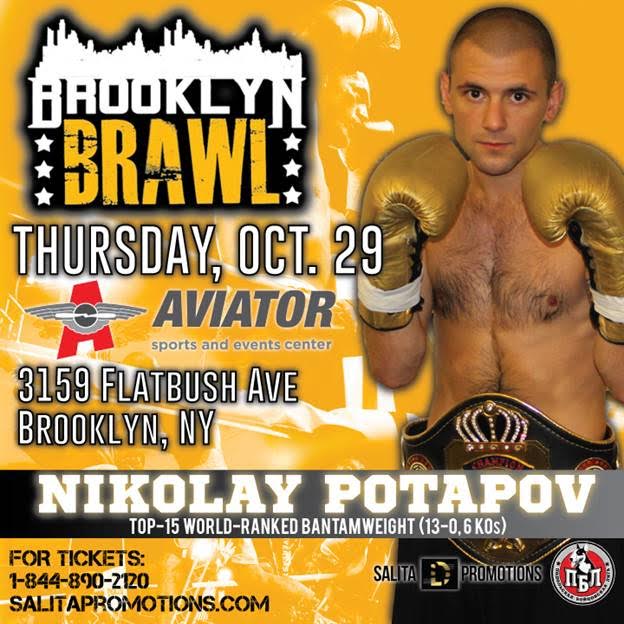 Potapov – currently ranked as the No. 14 bantamweight in the world by the WBO and No. 13 by the WBC will put his undefeated 13-0 record (6 KOs) on the line as he makes his debut on U.S. soil. The fast-rising battler piled up more than 180 amateur tilts and amassed a number of national and international tournament victories, and now as a 25-year-old pro has wasted no time in signing on for four 10-round bouts and a 12-rounder against experienced, top competitors. In his last pro victory, Popatov earned the WBA Asian title by besting Jason Canoy, who is rated No. 14 in the WBC and No. 12 in the IBF.

We sat down with Potapov to find out about his history with “the sweet science” and to learn more about what the unbeaten contender expects from his U.S. debut:

Question: How did you get your start in the sport of boxing? What made you look to turn professional?

Nikolay Potapov: I started boxing when I was a young boy. My father said, “Boxing teaches you to be a man, and develops your strength inside and outside.” When I was young our neighbor was a Hall of Fame boxing trainer of Russia. My father did not have to think about it for long before taking me to the gym, and that was my beginning in boxing.

Nikolay Potapov: I grew up in Podolsk, Russia, near Moscow. I started playing soccer and doing kick boxing at the age of six before eventually starting to box. I would go to school and then go to either soccer or kick boxing practice. I was a very good soccer player and captain of my team, every day I would practice until the lights went out at 9 p.m.

Question: You’ve had a quick rise to be listed among bantamweight contenders and the Top 15 in the world right now. What’s been your favorite part or most surprising aspect of your early success?

Nikolay Potapov: I had more 170 amateur fights which I believe gave me a great amount of experience and the ability to climb up the pro ranks at a faster pace. I love boxing and turned professional to pursue my dream of becoming a world champion, fighting championship fights and thrilling fans with my skills!

Question: What are you looking forward to in the U.S.? What do you think fighting in the U.S. is going to be like?

Nikolay Potapov: This will be my first trip to the U.S.A. I have always dreamed about fighting in the U.S. and in New York City, and my dream is coming true. I want to show my skills to the world and make my Brooklyn Brawl debut an exciting one. I am very focused on my boxing career and am very excited to progress and fight the best fighters in the world. I am committed to defeating whoever I have in front of me in the ring. That is why I am already rated in the top 15 in the world with only 13 fights, because I want to fight the best in my division. I fought fighters who are rated higher than me and with more experience from early in my pro career, I just want to challenge myself and fight the best!

Martin Murray: “You Offer Me Anyone For The Right Money I’ll Fight Them”

James Tennyson: “It Would be Foolish to Take This Fight Lightly!”