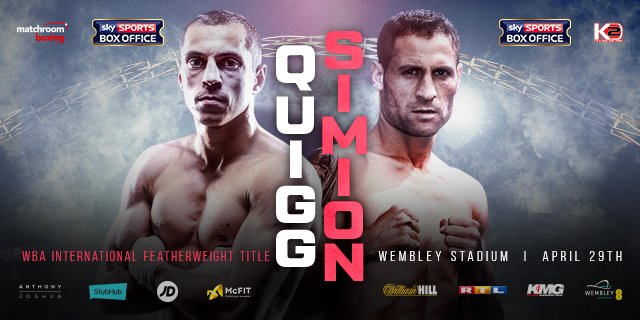 Scott Quigg takes on Viorel Simion on Saturday night in the undercard to Anthony Joshua MBE and Wladimir Klitschko’s title clash and the fight has been announced as an IBF World Fetherweight eliminator, at Wembley Stadium on the 29th April, live on Sky Sports Box Office.

The former Super – Bantam Weight champion who has moved up to Featherweight returns to the UK with new trainer, Freddie Roach and the fight now has more bearing against the Romanian following the IBF’s move to make this clash an eliminator.

Quigg, from Bury, is ranked 5th in the IBF whilst opponent Simion sits one place above in 4th. The winner would take 2nd place in the rankings and if Lee Selby’s mandatory challenger Jonathan Barros is unavailable to fight the Welshman, the winner of the eliminator on Saturday will meet Selby next.

“It’s a great opportunity for Scott and with the uncertainty over Jonathan Barros it’s very likely that the winner in Saturday will have to fight Lee Selby next,” said promoter Eddie Hearn. “It’s a fight Scott is targeting and one he would jump at so Saturday’s win now becomes even more vital.”

Quigg’s clash with Simion is part of a historic night of action on the sold-out blockbuster battle between IBF king Joshua and former lineal World ruler Klitschko, with the WBA and IBO straps also up for grabs, Luke Campbell MBE and Darleys Perez clash for the number one spot in the WBA, Irish sensation Katie Taylor faces Nina Meinke for the WBA Inter-Continental Lightweight title and World title eliminator and Team GB Rio Olympians Lawrence Okolie, Joe Cordina and Josh Kelly will draw lots to see who kicks off the historic night.