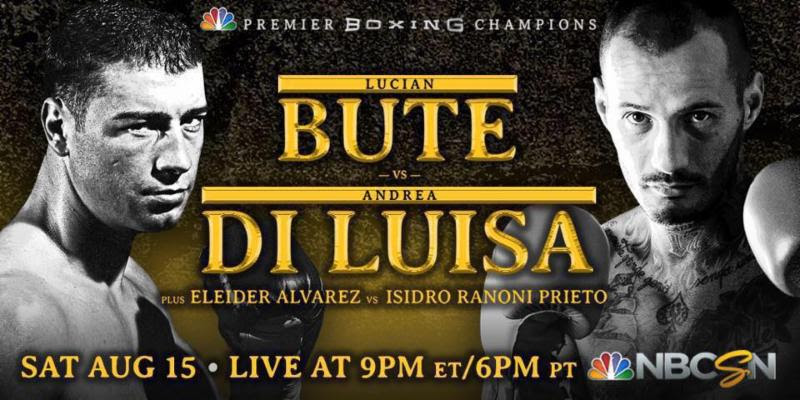 Only three days prior to their Premier Boxing Champions on NBCSN fights on August 15 card at Bell Centre in Montreal, a press conference took place today at the Montreal Casino. The event is headlined by a 10-round showdown between Lucian “Le Tombeur” Bute (31-2, 24 KOs) and Andrea Di Luisa (17-2). Also featured is light heavyweight contender Eleider “Storm” Alvarez (17-0) versus Isidro Ranoni “El Guerrero” Prieto (24-0-3) in a 12-round bout.

“I would like to thank Andrea Di Luisa for accepting this challenge and to fight me at home. My preparation was great. In the last few years, I had health problems that affected my performances. What I can say now is that I’m fully healthy. I did almost 100 rounds of sparring for this fight. I am back!”

“This bout is a rematch of an amateur fight we had 15 years ago. This is different this time because Bute is now a former world champion and a well know name in the sport. Make no mistake, I am here to fight.”

“This is the biggest challenge of my career. Prieto’s record says it all: he has 20 KO’s in 24 wins. The problem is that he will face a new Alvarez. Since my elbow surgery, my jab, which is my money punch, is amazing. I also want to look good in front of my fans in Montreal and on American television.”

“I will do my best to bring back the WBC light heavyweight Silver belt home to Argentina.”