-The ProBoxing-Fans.com Round Table; Columnists Chime in & Try to Reach a Consensus-

The Shane Mosley vs. Sergio Mora contest, while receiving little mainstream attention and falling far short of expectations for a Pay-Per-View contest, did manage to stir up some noise for the way the bout was scored. The scores came in 115-113 for Mora, 116-112 for Mosley and an even 114-114, leading to a Draw. (ProBoxing-Fans.com’s live Round by Round had a 118-110 score for Shane Mosley). 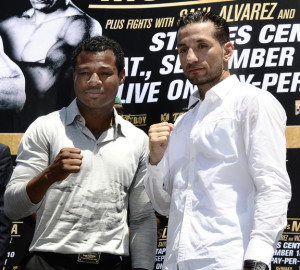 However, fans and columnists alike have had far differing points of view on the bout and its outcome. It’s rare that so many individuals are so wide apart in their beliefs for a single contest. While it was clearly a hard bout to score, and for much of the fight, there was little action to distinguish one man above the other, the outcome seemed to be lacking for many.

ProBoxing-Fans.com has conducted a poll since the Mosley vs. Mora bout, and fans have voiced their own opinions on the outcome. As of Monday, September 27th, 60% of fans thought Mosley should have won, 24% felt it was a draw, and 16% felt that Mora should have gotten the nod.

With that in mind, we pose the question to a few of our writers and columnists on the site. What did you think of the scoring, and how do you think people ended up so far apart from one another on the outcome?

Scott Levinson: I thought Mosley won the fight. Maybe I’m so hardened by the unfathomable verdicts that have been handed down over the years, but I’ve seen worse decisions. At least they didn’t give it to Mora. A lot smarter people than me have tried to figure out how judges can see a fight so differently. There seems to be a reluctance to get to the bottom of it because it gives cop-outs to the very guys we want to rake over the coals. Judges are not robots. They must have been boxing fans before they became judges. They had their favorite fighters and styles and probably still do to hopefully a lesser extent. All of our insights and judgments are governed significantly by our individual tastes.

You’ve heard it said before that 3 judges get 3 different views of a fight, but this fact is overlooked. Judges cannot be expected to register the full impact of pivotal punches where their views are compromised. More specific to Mosley-Mora, TV viewers tend to give more credit to the more aggressive fighter, especially in a dull fight with little to choose from. At ringside, you get a better sense if the aggressive fighter is truly putting a dent in his opponent. Obviously, two judges felt Mosley wasn’t very effective in his aggression.

Justin Landis: The opinions on the scoring were so far apart because there was just a general lack of effectiveness displayed by both fighters. Yes, Mosley was more aggressive than Mora, but none of this aggression developed into anything that created momentum or made Shane the clear winner. Mora landed a few right hands, but for the most part, was nowhere near as active as Mosley.  It all comes down to the ratio of punches thrown and landed. Mosley threw more punches than Mora and in turn, landed more. On the other hand, Mora spent most of the fight circling, backing up and throwing fewer punches so when he did land a shot, it was more noticeable and carried a greater impact than when Mosley did. I felt as if Mosley was the more aggressive fighter and should have won by unanimous decision, but the only justification I see for anyone scoring in favor of Mora is the fact that Mora’s occasional right hand connections seemed more significant to this particularly uneventful fight.

Dana Miller: A boxing match for fans and judges alike is simply based on what a particular person likes. Some like power-punches in a fight, some like jabs and counter-punching, and some like sheer aggression. This is actually the beauty of boxing. Each fight that is scored is simply based on what each individual judge prefers and if you change the scoring system for fights, this will take away the suspense of boxing.

Jake Emen: Sometimes so little happens in a fight, that you can seemingly pick at random a single action of a round in order to give it to one man over the other. In a fight like Mosley vs. Mora, that seems to be what happened, with some preferring the aggressiveness of Mosley opposed to the rare, solid connect for Mora.

There are many potential ways to help combat scoring problems in boxing, including superior standards for training and preparation, ongoing evaluation of judges, and so forth. Open scoring is not a solution to the problem, however. One unique idea- boost the action to 5 judges, with at least one judge on each side of the ring apron, and toss out the two largest outliers. Or simply use all 5 of the scores, to combat single erroneous cards.