Ricky Burns will defend his WBO lightweight belt against Jose Ocampo, with the Filipino replacing the injured Liam Walsh. The fight will top Frank Warren’s bill at the London ExCel Arena on the 15th December, supported by a top class undercard including George Groves’ fight with Glen Johnson for the Commonwealth Super-Middleweight title.

Burns (35-2, 10 KOs) will hope to build on his last display, when he looked impressive in defeating the highly rated Kevin Mitchell inside four. Ocampo (17-5-1, 12 KOs), who is ranked 14th by the WBO, will be seen as a step down by many, and the man from Coatbridge should be looking for a stoppage victory.

However, it’s clear to see Burns is not underestimating his opponent. “This is going to be the hardest fight of my career so far against a young hungry challenger who will be looking to take my title,” he said.

Victory for the two-division world champion could set up a huge clash next year against undefeated American superstar Adrien Broner. 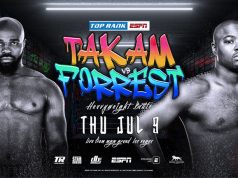