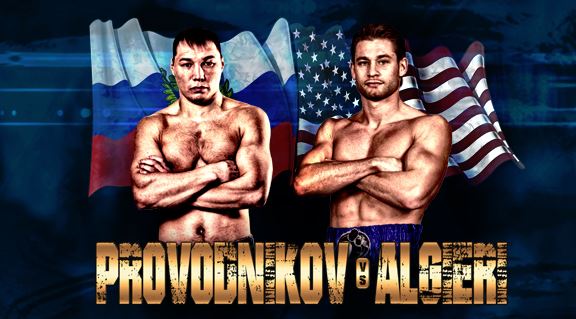 Check out all of the post-fight coverage on Provodnikov vs. Algieri, including photos, video highlights & more.

Saturday night at Barclays Center in Brooklyn, New York, televised live on HBO Boxing, Ruslan Provodnikov seeks to defend his 140-lb title strap against undefeated challenger and local favorite, Chris Algieri. ProBoxing-Fans.com is live ringside for the action in Brooklyn, and right here you can follow along for our Provodnikov vs. Algieri results coverage.

Provodnikov was the clear favorite coming into tonight’s fight, but it was Algieri who wanted to please the New York fans. Algieri was trying to work the jab early, but he left himself open and was caught with ferocious left hook. Later in the round, the Huntington native took a knee, after he took a big shot to the body. But from there, the rounds proved to be competitive. Provodnikov got some clean shots on Algieri while he was on the ropes. However, Alegieri demonstrated that he was not going to be outclassed. He landed several stiff jabs that snapped Provodnikov’s head back throughout the fight. When Alegeri was in the middle of the ring he was able to dance around and land some good shots. But when he got pressed up against the ropes, it was Provodnikov who was landing the big punches.

With Algieri’s eye swollen shut, many observers though that the fight wouldn’t last much later than the 6th round. Provodnikov may be called the Siberian Rocky, but it was Alegieri who went the distance against all odds. And ultimately he was ruled the better man tonight, by an unbelievably close split decision.

Demtrius “Boo Boo” Andrade took on Brian Rose in a junior middleweight showdown. Andrade was clearly the far superior boxer right from the beginning. A hard straight left hand from “Boo Boo” dropped Rose in the first round. From there Rose tried to remain cautious because every time he  would throw a punch, Andrade would unleash a barrage of his own punches. The fans began to boo in the middle rounds due to limited action. In the 7th round Andrade decided to push the action, as he landed several vicious uppercuts. Rose clearly had no chance tonight, and as a result the referee stopped the fight- giving Andrade the 7th round TKO.

Seanie Monaghan had the fans on their feet early on, as he constantly backed Elvir Muriqui onto the ropes. Muriqui was clearly outmatched by the more talented Monaghan. In closing seconds of the 4th round, Muriqui was hit with a flush shot, which sent him crashing to the canvas. But Muriqui showed tremendous heart, as he battled his way through the fight. In the 9th round, the two warriors would exchange big punches. One of the punches opened up a cut over the eye of Monaghan. The cut proved to be a nonfactor, as Monaghan would win a clear unanimous decision.

This fight had fireworks right from the start. Miguel Angel Mendoza was swinging away wildly- in the early rounds. Mendoza was clearly trying to get Fedor Papazov out of there early. But the strategy proved to be costly, as he got caught with a monstrous right hook by Papazov in the 3rd round.  The punch dropped Mendoza, but he was still able to beat the count. However, Mendoza’s corner threw in the towel right after he got up, as Papazov scored the TKO victory in the 3rd round.

– Heather Hardy, a native of Brooklyn, was clearly the crowd favorite in this fight. She was also favored to win the bout against Jackie Trivilino. But Trivilino was eager to make this one a tough challenge for the undefeated Hardy. The women clashed heads in the 2nd second round, which damaged Hardy’s eye. Then in the middle rounds both warriors started trading bombs. In between the  7th and 8th round- the doctors and the referee deemed that Hardy would not be able to continue. They would then turn to the scorecards because they ruled that the cut was a result of the head butt earlier in the fight. Ultimately, Hardy was awarded the very close split decision win.

Malik Jackson was hungry to pick up his first win against Chris Galeano. But Galeano was determined to keep his undefeated record intact. The two men had some decent exchanges, but it was ultimately Galeano who would prevail with the unanimous decision win.

In the first bout of the night, Brooklyn native Simeon Hardy took on Malcolm Terry. Hardy came out swinging early, as he would drop Terry several times before going  on to score  a 2nd round technical knockout.


Be sure to continue checking back with ProBoxing-Fans.com later in the weekend for post-fight updates, aftermath and analysis, and thanks for stopping by for our live ringside coverage of the Andrade vs Rose and Provodnikov vs. Algieri results.