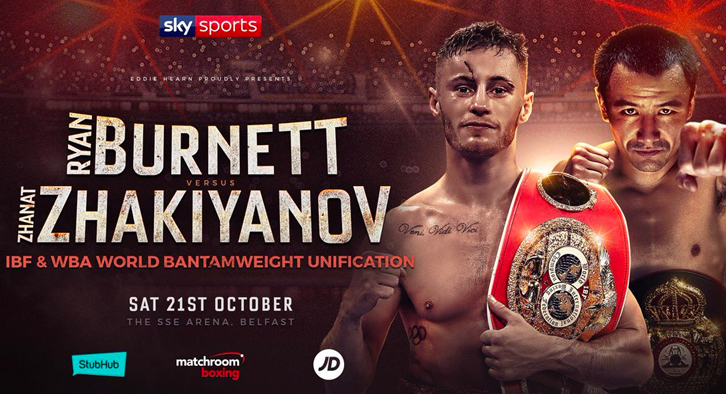 Tickets for the historic unification battle between IBF Super Bantamweight king Ryan Burnett and WBA ruler Zhanat Zhakiyanov at the SSE Arena Belfast on October 21, live on Sky Sports, will go on sale next Tuesday August 29.

Burnett makes the first defence of his crown having ripped the title from Lee Haskins in Belfast in June, and the unbeaten 25 year old faces a tough on a momentous night in front of his home town fans as Kazakh Zhakiyanov – trained by British legend Ricky Hatton – puts the WBA crown on the line following an impressive February win over Rau’shee Warren in his backyard in Ohio to claim the title.

Burnett and Zhakiyanov will come face-to-face for the first time at a public press conference at the Europa Hotel in Belfast next Wednesday August 30 from 12.30pm.

Promoter Eddie Hearn will reveal the early news on the undercard.

Tickets go on general sale at midday Wednesday August 30 priced at £33, £44, £65 and £105 from the SSE Arena Belfast at www.ssearenabelfast.com (ticket price includes inside Booking Fee)

Face value tickets for October 21 are also be available from http://www.stubhub.co.uk/matchroom-boxing-tickets/ . StubHub is the official ticket partner and marketplace of Matchroom Boxing and Anthony Joshua.