The Copper Box Arena hosted a terrific night of action, as the main event saw the victor guarantee himself a shot at Callum Smith, the WBA “Super” Super Middleweight Champion, or “regular” WBA Champion, Rocky Fielding, who meets Saul “Canelo” Alvarez in New York in December.

Islington’s John Ryder will be that number one contender, as he eventually scored a seventh round stoppage win against the Russian,Andrey Sirotkin in the main event. It was a cagey opening round, with both men feeling each other out, and this pattern continued into the second. Sirotkin was proving a tough nights work for Ryder, finding success with several right hands to seemingly open up a lead on the scorecards. A bad cut for Ryder in the sixth acted as a catalyst though, as he landed with impressive body punches. He carried this into the seventh, and, with Sirotkin visibly tiring, a ruthless right to the body finished the Russian off, barely beating the count, but stopped when rising to his feet. Ryders cut on the eyelid looked a bad one, and he will likely need some recovery time before his proposed shot at the World Title.

Jordan “The Thrill” Gill is finally starting to fulfil his huge promise. “Ruthless” Ryan Doyle was stopped on his feet in the seventh round as Gill lifted the Commonwealth Featherweight Title in a dominant display. Doyle was shaken several times during the fight, and Gill was impressive in winning near enough every round up to the conclusion with Doyle simply second best. Hard lefts and rights did the trick, and referee, Victor Laughlin stopped the fight at the perfect time, despite protestation from Doyle.

The vacant British Super Welterweight Title fight between Bermondsey’s Ted Cheeseman and Reading’s Asinia Byfield always threatened to steal the show as soon as it was announced, and the social media needle only enhanced this thought. Cheeseman stamped his authority on Byfield from early on, with clever attacks to both head and body, not giving Byfield a moments rest by setting a red hot pace. The pressure told in the fifth, when a straight right hand had Byfield on the canvas. Cheeseman was relentless, and landed with hard shots at regular intervals, with Byfield struggling to keep pace, which was frantic.

It was one way traffic throughout, with Byfield completely outgunned. Somehow, Byfield managed to make it to the final bell, showing tremendous heart in doing so, with the crowd on their feet at the end. The result was never in doubt, and the scorecards read 1117-111 (twice) and 117-110, to crown Cheeseman the new British Champion.

Isaac Chamberlain and Luke Watkins took part in an entertaining scrap at Cruiserweight. It was a close quarters fight, with both men exchanging body shots throughout, but Chamberlain always looked to have the upper hand. When Chamberlain let his hands go, he looked impressive, but he allowed Watkins to have successes of his own to remain lively in the contest. 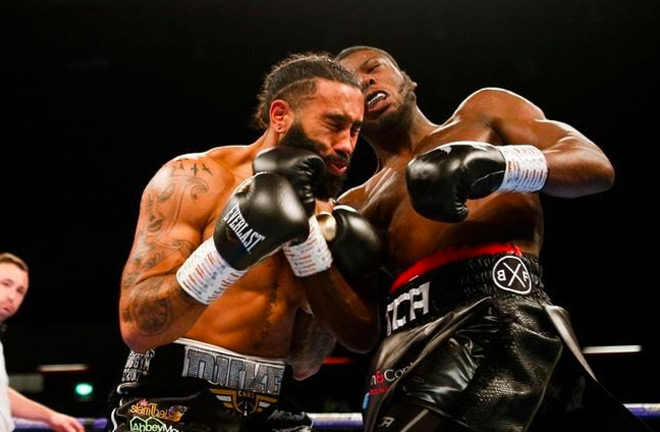 In the tenth and last round, Watkins started to unravel, and was repeatedly hurt by Chamberlain. He rallied, but then was caught by a number of punches, forcing him to go down right at the end of the fight. In the end the knockdown was pivotal as Chamberlain took a 95-94 verdict on the referee’s scorecard.

Kicking off the Sky Sports action was an interesting clash between hot prospect Felix Cash and the only once beaten Stephen Danyo in a Middleweight ten rounder for the WBC Silver Title. Danyo was moving up in weight, and was very cute and cagey, making it difficult for Cash to find real success. It turned into a fight of repetitive action, with Cash coasting to a simple enough shutout points win on all three cards (100-90)