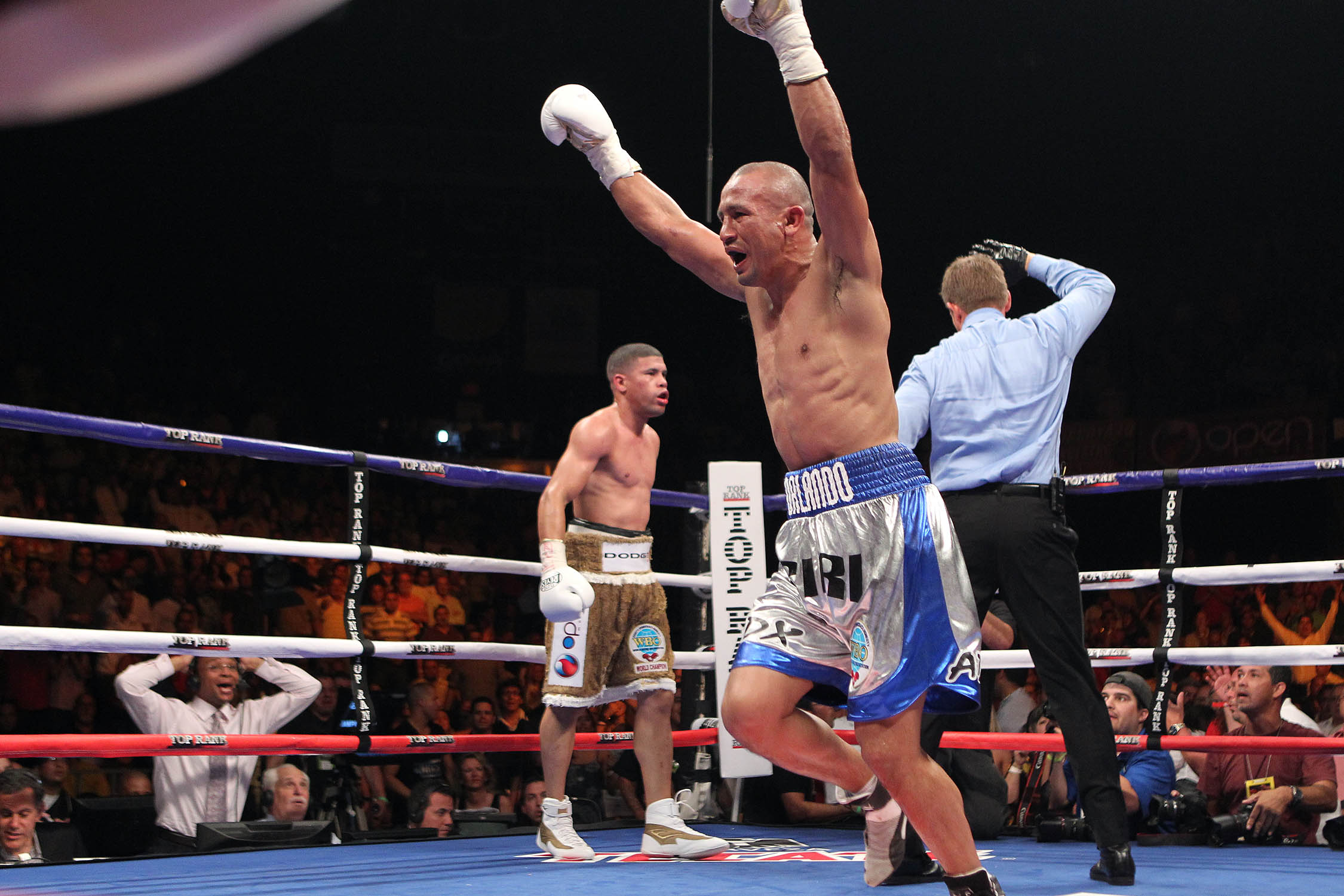 Salido Scores TKO Win over JuanMa Lopez in Eighth Round:

After thirty fights of stunning crowds with his ability to neglect defense and always come back to score the victory, Juan Manuel Lopez’ streak ended. Orlando Salido captured the WBO Featherweight Championship via eighth-round technical knockout (referee stoppage) after connecting with countless right hands including one that landed “JuanMa” on the canvas in the fifth round.

In the co-featured bout, Luis Cruz claimed a unanimous decision over Martin Honorio with the scores of 100-90, 98-92 and 96-94 from Ruben Rodriguez Coliseo in Bayamon, Puerto Rico.

At first it seemed like nothing new for the 27-year-old, charismatic Puerto Rican.

After Lopez (30-1, 27 KOs) won the first several rounds, Salido (35-11-2, 23 KOs), of Ciudad Obregon, Mexico, roared back by coming forward, bringing pressure and landing his right hand to the hard head of Lopez. In a flurry of punches between both fighters in the fifth, Salido landed a solid left hook followed by a hellacious right that sent JuanMa to the ground. Visibly staggered, Lopez called upon his warrior determination to return to his feet before the ten count and endure the dwindling seconds of the round.

Admitting to the severity of the knockdown, Lopez simply stated after the fight, “The punch in the fifth round hurt.”

The lingering effects of Salido’s monstrous right hand pushed JuanMa into survival mode throughout the sixth as Salido looked to end the night, but Lopez was able to miraculously hang on. By the seventh, the 10,115 loyal fans in attendance were on their feet and screaming at the top of their lungs as they witnessed their champion come back to life with a another signature gutsy performance.

But then the storyline changed.

Instead of Lopez springing from his corner in the eighth to knockout his opponent, it was Salido who charged into the round with a renewed sense of urgency to end the fight. Although Lopez was able to sporadically retaliate, Salido was landing the much cleaner, harder shots and Lopez was once again wobbling around the ring. The wobbling and lack of punching efficiency proved to be too much for referee Roberto Ramirez Jr. as he stopped the slugfest at 1:39 of round eight.

The stoppage surprised – and angered – many in attendance, as the boos were following by flying beer and water bottles from the pro-Lopez crowd. Lopez echoed the crowd’s displeasure with the ref’s ruling. “[Salido] was hitting me but [Ramirez Jr.] shouldn’t have stopped the fight,” said Lopez. “I was still conscious.”

For safety purposes, Rodriguez was walked out of the arena by a team of police escorts.

Proudly hoisting up his belt after the fight, the new champion said, “I came very prepared to fight the No. 1 featherweight in the world. I think the fight was going pretty evenly through the first five rounds but I knew I had to pressure [Lopez] because we were in his hometown.”

After considering the bout’s thrilling nature and competitive spirit, promoter Bob Arum informed the media at the post-fight press conference that he fully planned to schedule a rematch between Lopez and Salido in the fall.

In the night’s opening attraction, the Puerto Rican rising prospect Cruz (18-0, 14 KOs), of Philadelphia by way of Las Piedras, Puerto Rico, made his case for contender status with a solid unanimous decision over Honorio (29-6-1, 15 KOs), of Mexico City. Although the fight was closer than the hometown scoring (110-90, 98-92, 96-94) from hometown judges (Raul Nieves, Nelson Vazquez, Carlos Colon) would indicate, Cruz silenced any critics pointing to a lack of quality opposition on his resume. Honorio, a late replacement for Roman “Rocky” Martinez who withdrew after suffering a lower back injury in training, has shared the ring with many former and current champions and owns a collection of upsets throughout his career.

The first round saw the two fighters feel each other out before each man found his rhythm, with Cruz scoring on big single shots and Honorio punching in volume to make his mark. In an action-packed sixth round, the two exchanged several power shots with Cruz landing big left hooks and uppercuts and Honorio scoring with the right hand.

As the 10-round junior lightweight clash settled back down, a sense of confidence and poise came over Cruz who proved to himself that he could handle prizefighting at the next level. Although the scores were more lopsided than some may have believed, Cruz earned a hard-fought unanimous decision in his coming-out party as a legitimate contender.