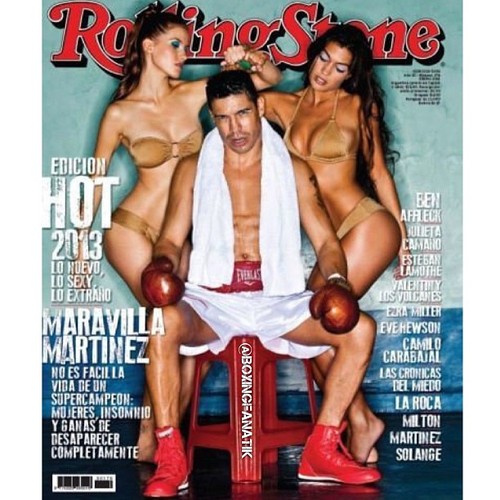 Middleweight kingpin Sergio “Maravilla” Martinez was on the cover of this month’s Argentine edition of Rolling Stone magazine that hit stands yesterday. He’s pictured sitting on a boxing stool with two, well, quite eye-catching ladies to the side of him. Take a look and read more about it right here.

The full interview with Martinez in Rolling Stone can be found here (in Spanish).

The WBC middleweight champion Martinez (50-2-2, 28KO’s) is set to defend his crown April 27th against the U.K.’s undefeated Martin Murray (25-0-1, 11KO’s) at Club Atlético Vélez Sarsfield in Buenos Aires, Distrito Federal, Argentina.  The soccer stadium will be set up to hold 50,000 + people, and will be the first fight for Martinez in his native country of Argentina since 2002.  HBO’s World Championship Boxing will provide live coverage of the event.  Martinez has already begun training for his defense on the 27th.

“I am very appreciative to Rolling Stone for placing me on the cover,” said Martinez.  “It is a great honor for me, and I had a great time working with the people at Rolling Stone on the latest edition of their magazine.”

“We at DBE have always believed that Sergio rocks. What better publication then to grace the pages of Rolling Stone. That is just flat out cool,” said long-time promoter Lou DiBella.

Martinez’ management team of Sampson Lewkowicz, Miguel Ángel de Pablos and Nathan Lewkowicz were also excited about Martinez being featured on the cover.

“I am very proud and very excited that he is being recognized for his popularity in Argentina.  This is a tremendous honor to be part of, let alone on the cover of such a historic magazine as Rolling Stone.” – Sampson Lewkowicz, long-time advisor.

“The hard work of the team is coming to fruition and Sergio is now recognized throughout the world as a true superstar.” –  Miguel Ángel de Pablos, business manager.

“It’s a very well written article and it introduces people that do not follow boxing to one of the sport’s best representatives.” – Nathan Lewkowicz, VP Sampson Boxing