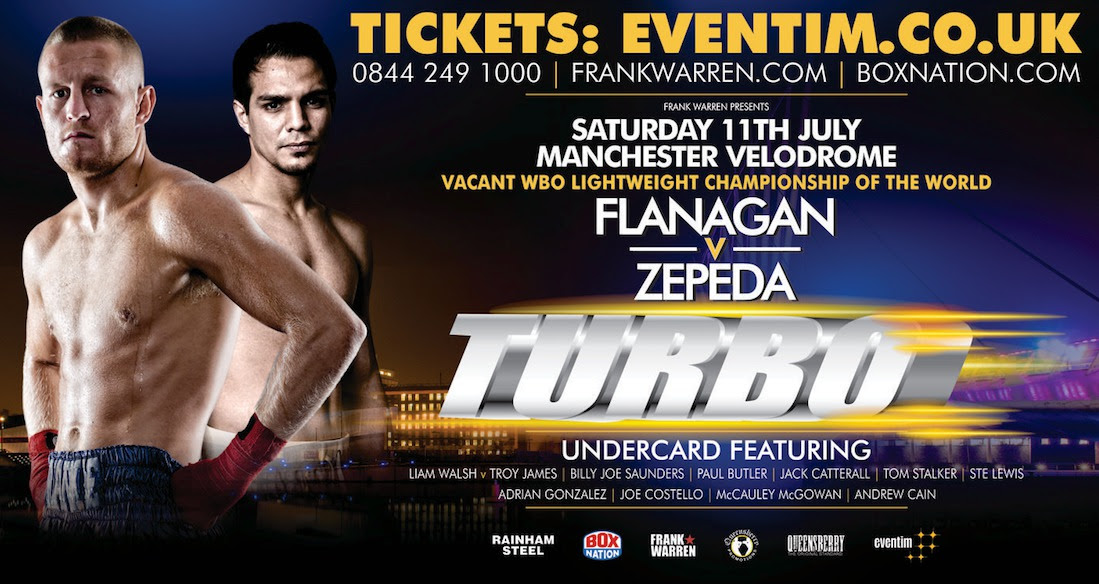 Manchester star Terry Flanagan knows that the pressure is on for him to win the WBO Lightweight title in his home city, but believes he can overcome Jose Zepeda to make history. Undefeated Flanagan gets his dream shot on Saturday July 11th in his backyard at the Manchester Velodrome as he aims to become the first English boxer in history to win a world title at 135lbs.

Zepeda from California is also undefeated and has stopped 20 out of his 23 victims, with a blistering 16 KO’s coming inside the first three rounds.

“I can’t wait for Saturday July 11th and for my chance to win the world title.

“The pressure is on, but I’m channeling it in a positive way and using it to fire me up for the fight against Zepeda.

“My dream chance is on my doorstep at home and I can feel the pressure knowing that thousands of my fans are going to be packed into the Velodrome looking to see me beat Zepeda.

“It’s fantastic that I could be the first Englishman to win the title in British boxing history and my name will go down in the record books alongside Freddie Walsh, Ken Buchanan and Jim Watt, but the most important thing I’m thinking about is winning the world title,.

“There’s no way at all I’m underestimating Zepeda and I’d be a fool to do that. He’s seriously dangerous and has wreaked havoc knocking people out left, right and centre, all within three rounds.

“He’s got to be very confident and fancy his chances to come over here and fight me. Mitchell put on a very brave performance against a class world champion so I know what I’ve got to do to beat Zepeda.”

An action-packed undercard features top talents Tom Stalker, Adrian Gonzalez, Steven Lewis, Joe Costello, McCaulay McGowan and Andrew Cain Tickets for ‘Turbo’ priced at £40, £50, £75, £100 and £150 will be available from Eventim on 0844 249 1000 and online at www.eventim.co.uk