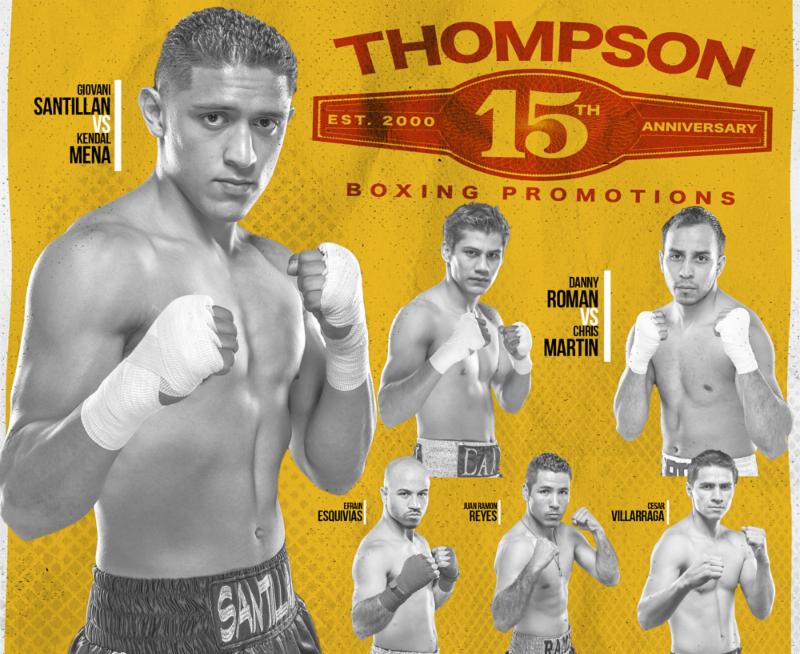 Thompson Boxing Promotions celebrates is 15th Year Anniversary with a big event on Friday, May 29 from the Doubletree Hotel in Ontario, Calif. Among those featured: undefeated junior welterweight Giovani Santillan, a pair of veterans with chips on their shoulders in Chris Martin and Efrain Esquivias, plus all-action sluggers Danny Roman and Juan Reyes.

“It’s a can’t miss show from top to bottom,” said Ken Thompson, president of Thompson Boxing Promotions. “There’s intrigue and excitement in each fight. It will be a night to remember.”

In the 8-round “Path to Glory” main event, rising star Giovani Santillan (16-0, 9 KOs) of San Diego looks to remain unbeaten against the talented Kendal Mena (20-1, 11 KOs) of Miami. Santillan, a southpaw, is among the most promising prospects in the 140 lb. division.

“I’m excited to be a part of Thompson Boxing’s fifteenth year anniversary show,” said the 23-year-old Santillan. “This company does a wonderful job in finding talented boxers and putting them on the road to become world champions. They did it with Timothy Bradley, Yonnhy Perez, and Jhonatan Romero. I’m confident that I’ll be the next one.”

In the 8-round co-feature, free-swinging super bantamweight Danny Roman (14-2-1, 5 KOs) of Los Angeles faces Chris Martin (28-5-3, 9 KOs), a savvy boxer-puncher from San Diego. Roman, winner of six straight, has quality wins against veteran fighters like Miguel Tamayo and Giovanni Caro. Martin, however, will be his toughest test yet.

“I know I’ll have my hands full against Martin,” Roman said. “He’s a tough boxer, but I have what it takes to continue winning.”

Preceding Roman-Martin are featherweights Efrain Esquivias (17-3-1, 10 KOs) of Carson, Calif. and Jose Haro (8-1-1, 6 KOs) of Salt Lake City (8-rounds). Esquivias, who not long ago was in an IBF title eliminator with future world champion Jhonatan Romero, is trying to climb back to elite level status.

“I’ve had some setbacks, but they are in the rear view mirror,” said Esquivias, who’s signature knockout win came against former world champion Rafael Marquez nearly two years ago. “I’m ready to bounce back and start another winning streak.”

Super bantamweight Juan Reyes (12-1-3, 2 KOs) of Riverside, Calif. brings his exciting brand of boxing to the more experienced Robert Castaneda (21-9-1, 15 KOs) of Mexico in an 8-round scrap.

“I’m going to come out firing like I always do,” Reyes said. “It’s an important show, and I’m going to deliver a memorable performance.

Opening the “Path to Glory” event is junior welterweight Rigoberto Flores (6-1, 2 KOs) of Los Angeles. An opponent will be announced at a later date (4-rounds).

Ken Thompson launched Thompson Boxing Promotions in May 2000, and since then, the company has enjoyed tremendous success. The fifteen-year-old promotional company boasts a diverse list of former and current world champions that are currently, or at one point, promoted by Thompson Boxing Promotions. The list includes: Yohnny Perez, Timothy Bradley, Jhonatan Romero, and Darleys Perez (interim).

The company continues to grow and nurture the future stars of the sport by carefully mapping the careers of young and talented prospects, such as: Josesito Lopez, Juan Carlos Burgos, Artemio Reyes, Efrain Esquivias, Giovani Santillan, Jose Roman, Cesar Villarraga, Carlos Carlson, LaRon Mitchell, among others.