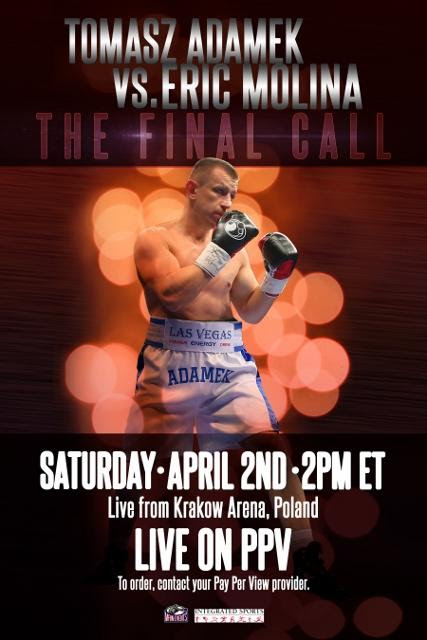 The 39-year-old Adamek (50-4, 30 KOs) is looking for an impressive victory over Molina (24-3, 18 KOs) and could possibly hang up his gloves for good if upset-minded Molina ruins the expected Polish celebration.

“I don’t want to just win,” Adamek said. “Along with my trainer, Roger Bloodworth, we want my fans to see a fighter who is in the ring to battle, not take a paycheck. My career is ending; no point of saving myself for the future. I will be in the ring to give people all I have. It’s a promise.”

Adamek has been a fan favorite throughout the boxing world since turning pro in 1999, not only in Poland but in America as well, primarily in Chicago and New Jersey markets, because he’s never in a bad fight. Adamek always gives fans their money’s worth, whether he was fighting as a light heavyweight, cruiserweight or heavyweight.

“I understand that this fight is on pay per view,” Adamek said. “Boxing fans want and deserve a fight they can be excited about. Styles make fights and knowing the way Eric fights, we can be sure that no one will be disappointed.”

Known and admired for his aggressive style and solid chin – Adamek has been stopped only once in 54 pro fights by the great Vitali Klitschko – Adamek fully embodies Polish Power and his passionate fans firmly remain in his corner. Sporting a 6-2 (3 KOs) record in world title fights, Adamek captured his first world title in 2005, taking a 12-round decision from Paul Briggs (23-1) for the vacant WBC light heavyweight crown. Adamek successfully defended his WBC 175-pound division twice, versus Thomas Ulrich (28-1) and in a rematch with Briggs.

Adamek then decided to move up to fight as a heavyweight, originally stopping fellow Pole and four-time world heavyweight title challenger Andrew Golota (41-7-1) in the 5th round for the vacant IBF International championship. Adamek went on to defeat 2004 US Olympian Jason Estrada (16-2), world title challengers Chris Arreola (28-1) and Michael Grant (46-3), tough Vinny Maddalone (33-6) and 1992 Irish Olympian Kevin McBride (35-8-1). Adamek, who added the NABO title belt to his collection with his win over Arreola, earned his first world heavyweight title shot September 10, 2011 versus reigning WBC champion Klitschko (42-2), who finished the game Pole in the 11th round.