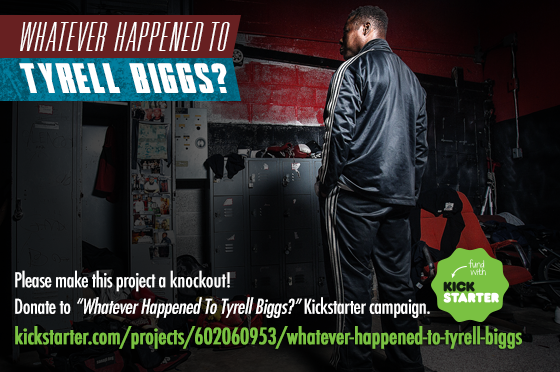 A city that has perhaps the richest boxing history of any may have neglected one of its best. In 1987 Tyrell Biggs seemed on the verge of writing a new chapter in boxing history. “The second-coming of Muhammad Ali,” they called him.

But then something happened and Tyrell Biggs began his steady decline into obscurity. Whatever happened to Tyrell Biggs? is the question co-director Dafna Yachin asks in her new feature documentary that explores Biggs’s life, from his teenage years in West Philadelphia to the resurfacing of his fatal flaws many years later as he faced the hard realities of professional boxing. 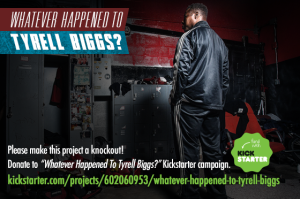 From standout high school basketball star to first-ever Olympic super heavyweight Gold Medalist, Biggs was on top of the world. Then came his descent into addiction. His personal comeback to fast-rising professional with a 15-0 record seemed unstoppable until a devastating loss in his title fight with Tyson. Biggs’s sudden fall from grace, his loss of heart, and his struggle to survive in the territory between relevance and obscurity
make for a gut-wrenching tale that will resonate with viewers from all walks of life, as Biggs confronts on a grander scale the struggle that lives in all of us.

Funds raised through this Kickstarter crowd funding campaign will help Yachin (who met Biggs at a local gym while working on a television series about boxing) and her team complete the film and share Tyrell’s story with the world. The film includes hard-hitting interviews with boxing greats and hopefuls such as Jesse “Hard Work” Hart and his renowned boxing father, Eugene “Cyclone” Hart. “This film is going to be a great display
of excellence in a boxing community,” says Jesse. “My father only let me study the greats and Tyrell was one of them. Everyone should support the documentary and join Team Biggs.”

Co-Directors Dafna Yachin and Trinity Greer; Writers Arthur Fischman and Dafna Yachin; Editor Geoff Morris; Executive Producers Dafna Yachin, Doc Nowicki and David Price; Producers Leilani Goode and Molly Brennan Lunchbox Dox, a division of Lunchbox Communications, is the team that brought you the award-winning Digital Dharma — the first film ever publicly screened at Philadelphia’s Kimmel Center. Lunchbox Dox puts a human face on the overcomplicated and underexplored. Along with a talented team of creative, strategic and technical professionals, Lunchbox has been bringing great stories and brands to life for more than 20 years. Lunchbox Communications has been headquartered in Philadelphia since 2000.