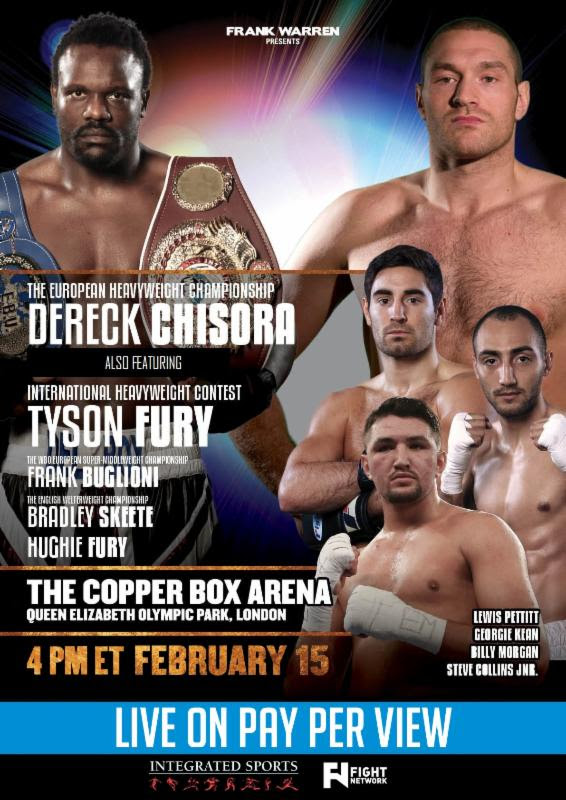 Heavyweight Tyson Fury is in a confident mood ahead of his ring return against big-hitting Joey Abell this weekend.

The Manchester bruiser will step back into the ring at the Copper Box Arena this Saturday night, following nearly a year of inactivity after two dates to meet David Haye were cancelled by the Londone.

There is no doubt that the 25-year-old Fury has endured a frustrating last year having seen the lucrative showdown pass him by, but he is now looking to bounce back to winning ways starting with American foe Abell.

Here’s what Fury had to say as the fight draws near:

“You can never overlook anybody. I’ll be taking this fellow very serious. I’ve been training hard, my diet’s good, everything’s good. So, it should be okay. I should come through.

“You know with me you never can tell what’s going to happen.

“That’s the package deal that you get. I might come in there all guns blazing. I do feel like coming out aggressive and just going for the knockout. That’s the frame of mind I’m in. But, you know, it doesn’t always work that way.

“But, you never can tell. It depends what mood I’m in on the night. When I’m in the ring as we all know I might have a gameplan before I get in. As soon as I’m in there and I get punched in the face, it comes to my world and I do what I want.”

Should Fury come through Abell, who holds an impressive record of 28 knockouts from 29 wins, he is expected to share the ring once again with Dereck Chisora, who headlines this weekend’s bill with his fight against Kevin Johnson.

Chisora and Fury met previously in 2011 at Wembley Arena, with the undefeated Fury winning a unanimous points decision.

Fast forward three years and Chisora has improved significantly, having gone the distance with Vitali Klitschko for the WBC world title and recording impressive wins over Malik Scott and Edmund Gerber along the way.

A ‘Battle of Britain’ blockbuster with Fury this summer, should both men prevail in their upcoming fights, represents a bout that will stir the interests of the wider sporting public.

“This fight between me and Dereck Chisora is the heavyweight fight of Britain, isn’t it?

“It’s the only heavyweight fight out there, especially involving two British heavyweights, that is worth mentioning and worth talking about and it’s going to get the people talking because opinions is what counts. We’ve already fought before. I have that victory. Different game plans and different nights, different things arise,.

“People will be talking and it’s going to get people’s interest because Dereck has been active. He’s fought Klitschko, he’s fought David Haye, he’s fought loads of good people and I’ve been inactive for a year as well. So, that makes it interesting.

“When I fought Dereck Chisora the first time, he had been inactive for a year as well. So, it’s a little bit of a revenge, isn’t it – it’s going to be a good one.”