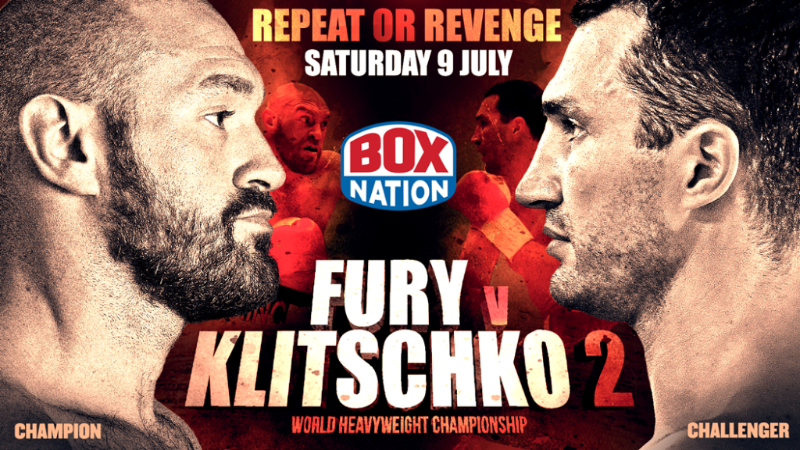 Heavyweight champion Tyson Fury’s highly-anticipated rematch against Wladimir Klitschko has been confirmed for Saturday, July 9th at a venue in the Northwest of England to be announced by promoters Hennessy Sports and K2 Promotions. In the UK, Fury vs. Klitschko II will land on BoxNation. In the US, the bout will likely land on HBO.

The rematch sees Fury, the linear World Heavyweight Champion, make the first defense of the titles against the man he took them from in an explosive blockbuster showdown.

Undefeated Fury shocked the sporting world last November when he sensationally dethroned long-reigning heavyweight icon Klitschko in one of boxing’s biggest ever upsets in recent years at the Esprit Arena in Dusseldorf, Germany. The self-proclaimed Gypsy King broke down in tears in the ring after he ended Klitschko’s long reign as Heavyweight Champion with a deserved unanimous decision as he outboxed the Ukrainian.

Fury (25-0, 18 KOs), who is regarded as the leading Heavyweight in the World, has stated his desire to dispose of Klitschko again before targeting a potential showdown with WBC king Deontay Wider (36-0, 35 KOs), but in one of boxing’s most eagerly-anticipated rematches, Fury will first be looking to prove his doubters wrong once more.

Klitschko is gunning for revenge after suffering his first defeat in over 11 years at the hands of the Mancunian. The 40-year-old was quick to take up the contractual option for a rematch against Fury; ending speculation that he would decide to retire after his 11 year, 22-fight unbeaten streak was spectacularly ended. ‘Dr Steelhammer’ (64-4 54 KOs) is determined to recapture his belts from Fury and take his place back at the top of the world heavyweight scene.

Fury said, “I’m thrilled to get this fight on July 9th and more importantly the fight is going live on BoxNation. I’ve had great relations with the team at Boxnation and I’m over the moon to be working with Boxnation once again in this super fight. I’m the best heavyweight in the world and the rest are imposters to my titles. I am coming for all of them once I’ve dealt with Klitschko a second time.”

Klitschko said, “I’m honoured that my rematch with Tyson Fury will be shown LIVE by the UK’s premier boxing network, BoxNation on Saturday 9th July. BoxNation has shown a great commitment and has a tremendous reputation for showing the best fights from around the world and this rematch is a perfect fit. Boxing fans worldwide will watch this international mega event and I’m looking forward to coming out victorious against Tyson Fury and regaining my heavyweight titles.”

BoxNation Chairman Frank Warren said, “BoxNation is the REAL home of the real Champions and I’m delighted that we’ve secured the real Heavyweight Championship of the World with Fury v Klitschko II which is by far the biggest fight in Europe so far this year. The addition of the fight to the channel is another fantastic acquisition following on from the recent capture of the blockbuster showdown between Khan v Canelo. This yet again shows our commitment to bringing the biggest and best fights to our BoxNation subscribers. The night promises to be one of the biggest events in the UK for years and I’m thrilled our channel will be there as Fury looks to cement his place as king of the heavyweight division.”