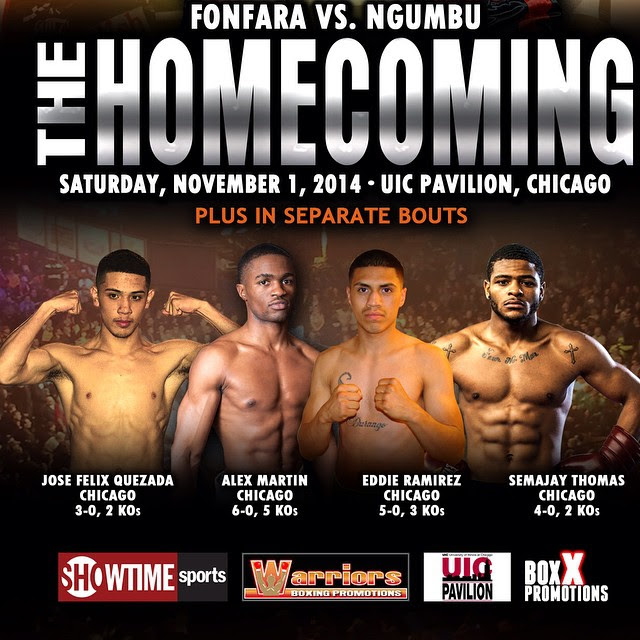 Welterweight Semajay Thomas (4-0, 2 KOs), 21, was a top-rated amateur boxer who won the 2009 National Championships. Thomas was ranked No. 1 in the nation and considered the top seed in the 2012 Olympic Team Trials. He finished his amateur career with a record of 64-5 with 12 KOs. As a professional, Thomas has been devastating, having fought just 10 rounds in his four professional fights.

Welterweight Eddie “The Barber” Ramirez (5-0, 3 KOs), 22, of Aurora, Ill., was a 2013 Chicago Golden Gloves Champion who was voted Best Boxer for the entire tournament. He was also a 2013 National Golden Gloves Tournament of Champions finalist. As a professional, Ramirez has beaten his first five opponents, including 4-1 Alexis Del Bosque (UD 4) and 3-1-1 DeMarcus Rogers (KO 1).

Welterweight Alex Martin (6-0, 5 KOs), 25, was a 2009, 2011 and 2013 Chicago Golden Gloves Champion and a 2012 U.S. Olympic Team Alternate. Martin finished his amateur career with a 340-10 record. As a professional, Martin stopped his first five opponents before going the distance in his last fight (UD 6 over Alfred Hall in July).