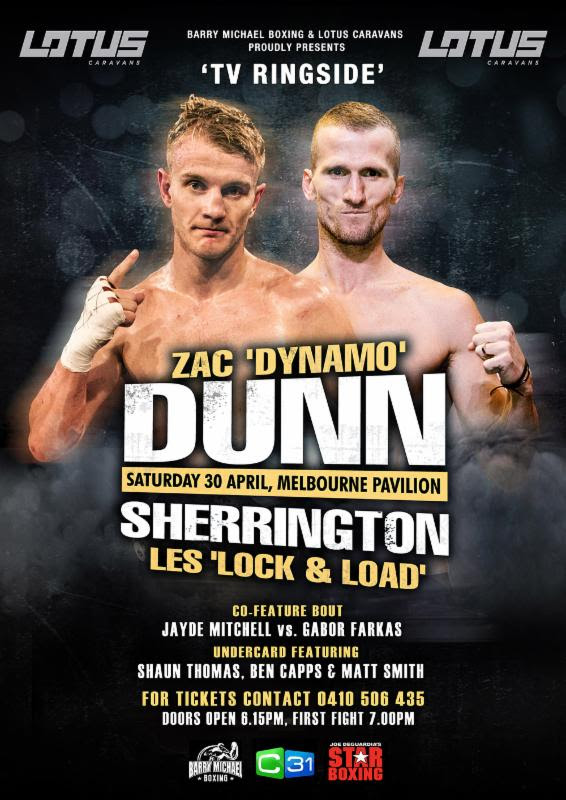 Unbeaten Australian sensation Zac Dunn (20-0, 16 KOs) will put his untarnished record on the line in his hometown at The Melbourne Pavilion, taking on always-dangerous Les Sherrington (35-8, 19 KOs) this Saturday night, April 30.

The “Dynamo” from Down Under won his United States debut last October under Joe DeGuardia’s Star Boxing banner, and now makes his second straight appearance back on Australian soil in quest of his 21st straight victory. On February 26, Dunn captured the vacant WBC International Silver super middleweight title with a first round knockout over heavy handed Brazilian Rogerio Damasco, also at the Melbourne Pavilion.

Dunn’s United States and Star Boxing debut was a spectacular performance at Rockin’ Fights 21 on October 24 at the Paramount. DeGuardia’s headliner saw Dunn battle grizzled veteran Derrick Findley (22-17-1 14KO Gary, IN) in a “Fight of the Year” candidate over 10 rounds. Dunn won the thrilling split decision by two scores of 95-94, while the third judge had the same score in favor of Findley. From bell-to-bell, the raucous crowd was thrilled by the barn-burner, as the Australian and Findley went toe-to-toe, throwing bombs all night.

Ranked #10 by the WBC, the wonder from Down Under has reeled off 20 straight professional victories without defeat, including 16 by way of knockout.

“This is a very important fight for Zac, said DeGuardia. There are many opportunities available in the Super Middleweight division with elite fighters. I am confident that Zac will once again put on a spectacular performance and be victorious against the dangerous Sherrington.”

During a storied amateur career, Dunn scored 152 victories in 170 fights, showcasing his talents all over the world. The battle-tested Australian has fought in in Baku, Azerbaijan (bronze at the World Cadets Championship 2007), Guadalajara, Mexico (quarterfinalist in the World Youth Championship as Australian captain), Noginsk, Russia (Silver medallist at Junior Memorial), and Anapa, Russia (Bronze medallist twice at Nikolay Pavlyukov Memorial 2008 and 2009), and Guantanamo, Cuba (silver medallist at the international tournament Giraldo Cordova Cardin 2010).