Light welterweight Bradley Saunders (12-0) is back in action following a long layoff from injury on September 19th at the Liverpool Olympia on the undercard of Stephen Smith’s title eliminator.

The undefeated 140-pounder from County Durham now residing in Marbella has not fought for six months, his last fight resulting in a fifth round stoppage over tough Frenchman Stephane Benito (22-18-3) at the Ice Arena in Hull on March 7th.

Saunders said of his return to the ring, “It’s brilliant, obviously I’ve been out for obvious reasons but I’m made up with getting out in September, I’ve had my break and I’m all good to go now.”

The former Beijing 2008 Olympian ruptured tendons and ligaments in his right hand during training, subsequently having to undergo immediate surgery to repair the damage.

Of his injury, the Sedgefield boxer commented, “The hand is brilliant! I’ve been on the pads with Danny Vaughn and all the lads in the MGM Gym were watching me and I was hitting the pads really hard and felt completely comfortable in there.

“It actually feels in better shape than when I had it done before to my other hand.”

No stranger to hand injuries, in December 2012 Saunders damaged his left hand in the fifth round of his fifth professional fight when defeating the only opponent to take him past six rounds – MGM stablemate and Irish light-middleweight champion Peter McDonagh.

Hand specialist Mike Hayton operated on both hands on two separate occasions at The Alexandra Hospital in Cheshire.

Saunders praised the surgeon, “Had it done by Mike Hayton of Manchester who is one of the best, if not the best.”

Hand injuries are commonplace in boxing but Saunders explained how it was always just a matter of time before his tools needed correcting after decades of wear and tear.

“I took fights even though my hands weren’t great but if you don’t fight then you don’t get paid and they were always gonna go,” said the Sedgefield boxing star.

Two injuries later and half a year’s respite has left many boxing fans curious as to whether the recent plights could affect his next performance and long-term career being just six months away from his 30th birthday.

“Since you saw me last, well, I’m always me in there and do my job,” he assured. “Danny Vaughn who trains me now knows me as good as anyone and I’ll be a bit more composed, I’ve rushed it before but I’m more patient now.”

Of his future plans, he stated, “I’d like to fight twice more this year but it’s down to whatever Eddie Hearn and my manager Daniel Kinahan have in store for me, I’ve already said I’ll fight anybody.”

The disappointment that followed the cancelled Commonwealth title challenge against Dave Ryan has been replaced with excitement as the pair fight just one week apart in September.

Commonwealth light-welterweight champion Dave Ryan tackles old foe John Wayne Hibbert (15-3) from Essex on September 12th at the O2 Arena in London in a fight that will complete their trilogy, currently scored 2-0 in favour of the Derby man.

It provides the perfect opportunity for comparisons to be drawn ahead of their expected meeting later in the year.

“I want the big fights for the big titles and I’d love the Dave Ryan fight and I know that he’d love it as well,” enthused Saunders.

“It’ll be a big learning fight for me, Dave has already been there and done it. I know he’s got the John Wayne Hibbert rematch in September so anything could happen but, without a doubt, I’d fight the winner of that fight. I was promised it last year so I want that commonwealth title.”

September 19th will provide Saunders’ with his second professional fight in Liverpool, the first being his debut in front of the Sky Sports cameras under the Matchroom banner beating the number one Latvian light-welterweight Ivan Levickis (13-14) on points over six rounds.

He said of the North West maritime city, “Boxed there a few times before, I’ve got a lot of friends there and always get a good support.”

Of the fight topping the bill, Saunders stated, “I’ve known Stephen Smith since I was a kid and he’s a really nice lad, he deserves this shot and he’s been in with the best. I think he’ll do it, especially in his own back yard.”

Stephen Smith (22-1) will face Devis Boschiero (37-3-1) in the main event which will be a final eliminator for the IBF World Super Featherweight title.

‘Swifty’ is hunting a World title shot against IBF king Jose Pedraza but will have to get past former EBU European champion Boschiero first.

The Italian known as ‘Boom Boom’ has already fought for a World title, earning his shot at the WBC World Super Featherweight title in November 2011 after reaching 30 fights unbeaten. He was edged out via a controversial split decision against Takahiro Ao in Tokyo.

The second eldest of the quartet of boxing brothers made waves in the 130lbs division last year with impressive wins over Sergio Medina and Mauricio Munoz and will have to be on his best on the night against a vastly experienced opponent ranked number one in his country. 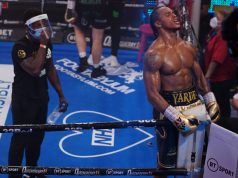