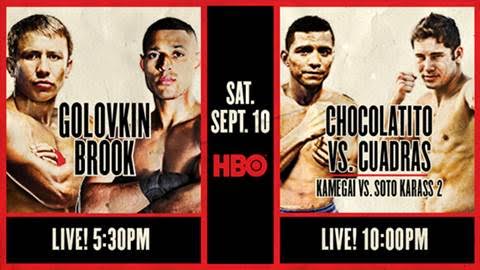 Two of boxing’s best are sharing the stage once again, although this time, from different halves of the globe and in different time slots. Here, Harold Lederman is back with his latest Hey Harold segments for HBO Boxing.

He breaks down both the Gennady Golovkin vs. Kell Brook fight, airing live in the U.S. on Saturday afternoon, and the Roman Gonzalez vs. Carlos Cuadras fight, being shown in the evening.

Lederman says it’s amazing that nobody wants to fight GGG, but that Brook stepped up from welterweight. He says the hometown advantage should be big for Brook. He’s never fought at middleweight, but he does have the size and skill.

Still, Lederman is a big believer in Golovkin, including his chin. Not to mention is ability to just “knock people dead.” He thinks it should be an interesting fight.

As for Gonzalez vs. Cuadras, he talks about how Gonzalez has been so sensational in his HBO Boxing appearances. He’s attempting to become the first Nicaurauan to win titles in 4 divisions.

Cuadras is no joke though, he’s an unbeaten fighter with good skills. He says that he has a chance to pull the upset by decision. But Gonzalez is incredible, with amazing power especially at that weight class. So, Lederman is expecting a dynamite fight.