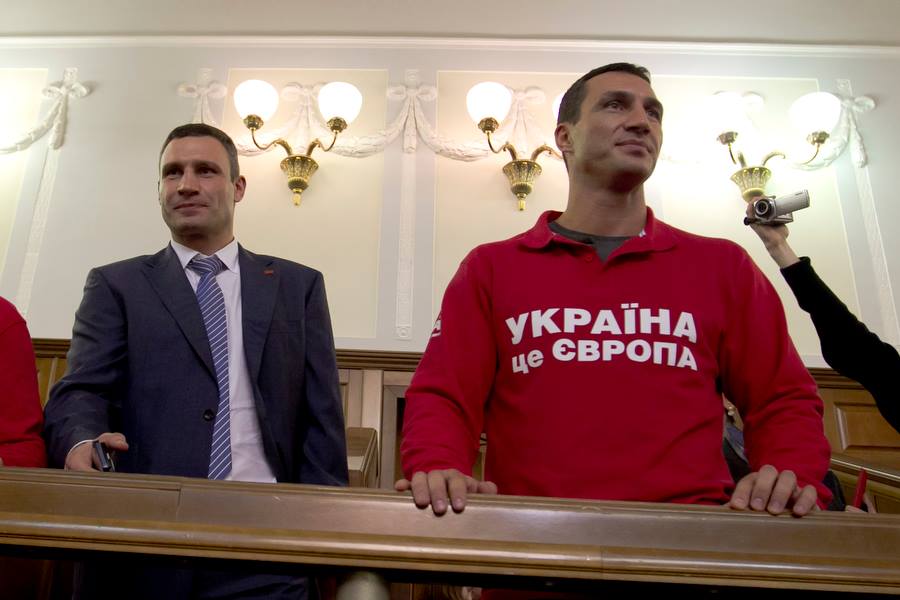 The Board Meeting of the WBC and its president Jose Sulaiman have decided to appoint Vitali Klitschko as Champion Emeritus.

The WBC show his full support of Vitali Klitschko in his political activities in his home country Ukraine and understand that he is unable to defend his title inside the ring in the foreseeable future. Therefore the WBC appoint Klitschko Champion Emeritus and thus give him the opportunity to decide at a later point whether he wants to resign from professional boxing or fight for the WBC Heavyweight title again.

“I want to thank the WBC and its president Don Jose Sulaiman for the support in our fight for democracy and freedom in the Ukraine. It was and is a great honor to hold the WBC title and I’ve always done it with pride. The offer of the WBC gives me the theoretical possibility to return to the boxing ring which I cannot imagine at all to the current state. Right now, my full concentration is on politics in Ukraine, and I feel that the people need me there. My brother Wladimir will ensure more sporting success and I will – as always – support him as much as he currently supports me in my political fight.”

Vitali Klitschko captured the WBC Heavyweight crown for the first time in 2004. After a break of his career of almost four years due to an injury, he returned to the boxing ring in 2008 and succeeded one of the greatest comebacks in sports history. With an impressive performance against reigning WBC Champion Samuel Peter, Klitschko regained the WBC belt for the second time by TKO 8.

He therefore became the fourth boxer alongside Muhammad Ali, Evander Holyfield and Lennox Lewis to win a heavyweight belt for the third time. With this success and his younger brother Wladimir Klitschko also being a World Heavyweight Champion, both Klitschkos were at the same time World Heavyweight Champion which secured them an entry into the sports history books. In 2011, the Klitschko brothers even became the first siblings to unify all heavyweight belts under one family name.

The WBC is proud and honored to confirm the status of Vitali Klitschko as WBC Heavyweight World Champion Emeritus. Undoubtedly, Vitali has earned that distinction through his actions inside and outside the ring.

Vitali Klitschko is fighting the fight of his life; this time outside the ring. Vitali is showing to the world what is the true heart of a champion by leading his countrymen to battle in the streets in their search of human equality, rights and peace for the great country of the Ukraine.

Vitali Klitschko announced his candidacy for the Presidency of the Ukraine, which election will take place in 2015. Vitali believed he would be able to defend his WBC Heavyweight World Championship, and wanted to do so against the WBC mandatory contender Bermane Stiverne.

Vitali attended the WBC 51st annual convention in Bangkok last November. At the convention, the representatives of the 165 countries affiliated to the WBC issued a special proclamation applauding and joining his efforts to represent boxing and the WBC in his candidacy for the presidency of the Ukraine .

With the current extreme and delicate political situation in the Ukraine, Vitali has answered his country’s call to fight for human rights and equality. Accordingly, Vitali will not be able to provide the WBC with a predictable timeframe to return to the ring. In light of those considerations, the WBC Supreme Council and the WBC Board of Governors have voted unanimously to name Vitali Klitschko WBC Heavyweight Champion Emeritus. Very few great fighters have received such an honorable distinction, which will entitle Vitali to fight for the WBC Heavyweight World Championship when he is ready to return to the ring .

The WBC joins Vitali in his struggle to fight for democracy; to promote rule and order and human equality in his country; and to follow the path of the great Nelson Mandela who paved the way for many to stand up for what they believed was right and to make this a better world .

The WBC will conduct a very special ceremony to award Vitaly his WBC Emeritus Champion distinction in the very near future. In the meantime we all wish him great success in his political career.