Deontay Wilder emphatically reasserted himself as the most devastating puncher in the entire heavyweight division, knocking out Dominic Breazeale with a huge right hand in the 1st round to defend his WBC heavyweight title at Barclays Center on Saturday night.

Wilder (41-0-1, 40 KOs) was coming off a controversial draw with Tyson Fury back in December 2018 in a fight that many felt he lost and was exposed despite registering the bout’s only knockdown. Eight months prior, he was rocked in another tough test against Luis Ortiz before storming back to stop the Cuban in the 10th round.

Unable to secure either a rematch with Fury or a unification fight with WBO, WBA and IBF belt-holder Anthony Joshua, Wilder opted instead to defend his strap against mandatory challenger Breazeale.

That frustration as well as the pent-up animosity felt toward Breazeale over a hotel scuffle involving their families in 2017 especially motivated the champion to end matters quickly.

“Everything just came out of me tonight,” Wilder said.

Wilder drove Breazeale back with the right hand earlier in the first round, before nailing him with another right hand that had the challenger stumbling. Wilder then gave chase attempting to land a finishing blow while Breazeale went into full survival mode. Breazeale did manage to land a cracking right hook on the champion’s jaw that appeared to briefly stun him. 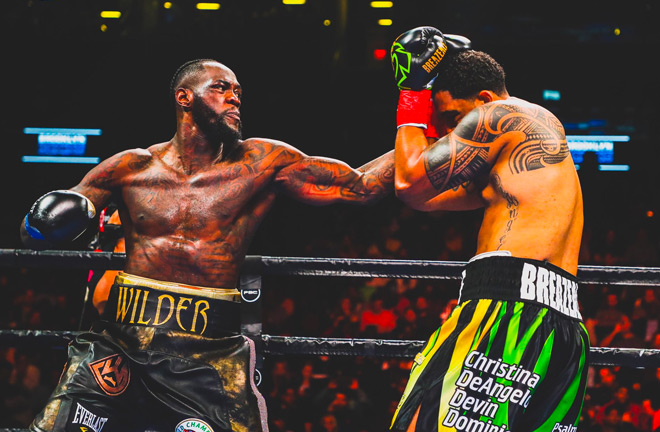 Moments later, Wilder closed the show for good with a chilling right cross to the chin that knocked Breazeale out cold on his feet. The challenger’s back hit the canvas hard as he laid momentarily spread eagle before coming to his senses. He was eventually able to make it to his feet towards the end of the count but was clearly in no condition to continue as the referee waived off the action at 2:17.

Wilder, 33, made the ninth defence of his WBC title since originally capturing it with a unanimous win over Bermane Stiverne in 2015.

Breazeale (20-2, 18 KOs) suffered his second pro defeat in as many title fights, having been stopped previously be fellow titlist Joshua in the 7th round three years ago. The loss will likely end his run as a top contender for the football player-turned boxer.

Breazeale had previously downplayed Wilder’s vaunted power and sounded delusional in the post-fight interview by insisting that the stoppage was premature.

“I think the ref stopped it a little early because I could hear him saying seven and eight, but that’s boxing,” said Breazeale.

However, actual replay of the knockout show Breazeale clearly out of sorts as he attempted to regain his footing. Even when standing upright – and after the fight was waived off – Breazeale stumbled backwards into the ropes.

An interesting side note is that Wilder weighed a little more than 223 pounds for the fight compared to Breazeale, who tipped the scales at 255 pounds. Wilder weighed just 209 pounds for the Tyson fight which simply underscores his otherworldly punching power against naturally bigger opponents.

“Fury shouts ‘dosser’ at him as he goes to the corner…” 😆

Only a Gypsy King would dare to showboat against Deontay Wilder 😳 pic.twitter.com/LRNEMuhHJl

The knockout likely brought an end to their long-standing feud but these unsavoury comments made by Wilder to USA TODAY Sports during fight week have drawn intense criticism that could potentially come back to haunt him:

“If he dies, he dies. This is boxing. This is not a gentleman’s sport. This is a gladiator’s sport. And with bad blood, we know I possess the power.”

Most notably Wilder’s comments about killing an opponent have caught the attention of the World Boxing Council, which has confirmed that he will be subject to a formal hearing.

It’s impossible to determine how much lasting damage, if any, Wilder’s comments will create but attention has already reverted back to the one fight that many fans actually want to see and that is Wilder vs Anthony. Thus far, it’s been all talk and no action with both sides seemingly unwilling to reach a compromise.