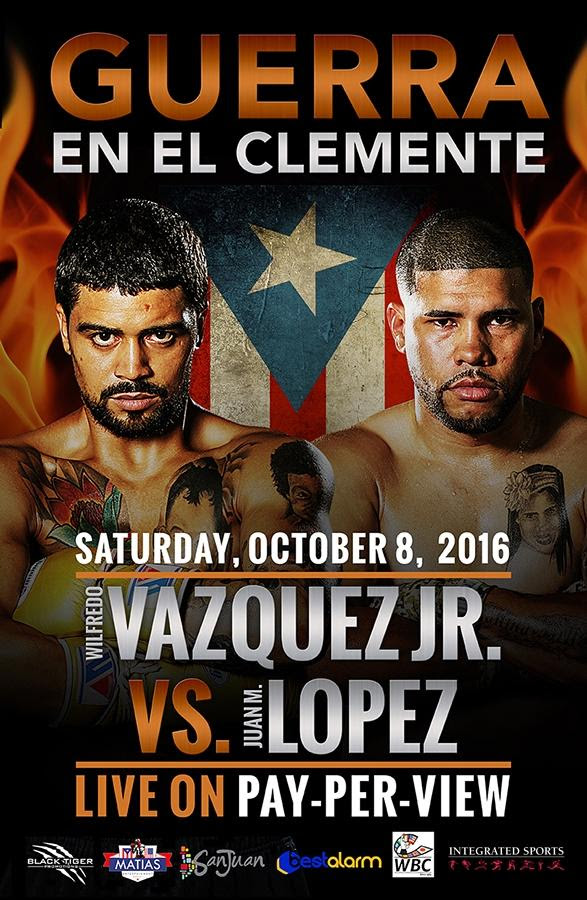 Guerra En El Clemente: Vasquez Jr. Lopez, presented by Black Tiger Media, will be distributed by Integrated Sports Media live, starting at 9 p.m. ET, in the United States and Puerto Rico on both cable and satellite pay per view on iN Demand, DISH, DIRECTV and Vubiquity. The event will also be available to watch across Canada on Fight Network, as well as via Fite TV app for iOS and Androide devises or watch on the www.Fite.TV website. Suggested retail price is $29.95.

“We’re excited to bring North American boxing fans a true grudge match between former world champions Wilfredo Vasquez, Jr. and Juan Manuel Lopez,” Integrated Sports Media president Doug Jacobs said. “It’s also a crossroads fight with the winner most likely back as a legitimate world title contender and the loser possibly facing retirement. They really don’t like each other and sparks will be flying from the opening bell. Additional pay-per-view fights will be announced soon and with the passion of Puerto Rican fighters, we anticipate a can’t-miss show for real boxing fans.”

“I am thrilled and happy to be able to present this highly anticipated event to boxing fans in Puerto Rico and the United States,” said Carlos Maldonado, President of Black Tiger Promotions. “The response from all cable and satellite providers has been phenomenal. This fight promises to be an all-out war in the ring, non-stop action from the opening bell until the end, which could happen at any moment. No hype; these guys really don’t like each other. ”

The 12-round Vasquez, Jr. vs. Lopez main event is presented in association with Matias Entertainment and sponsored by Best Alarms and Municipio de San Juan.

The 32-year-old Vasquez, Jr. (24-6-1, 19 KOs), the son of the great 3-time division world champion Wilfredo Vasquez, fights out of the boxing hotbed of Bayamon, Puerto Rico, which is known for producing great boxers including the late Hall of Famer Hector “Macho” Camacho. He captured the vacant World Boxing Organization (WBO) super bantamweight world title in 2010, stopping previously unbeaten Marvin Sonsona (14-0-1) by way of a fourth-round knockout.

Vasquez, Jr. made a pair of successful title defenses against 15-0 Zsolt Bedak (TKO10) and 26-6-1 Ivan Hernandez (TKO11), before losing his title belt in 2011 to Jorge Arce (TKO12) marking the only time Vasquez has been stopped in his nearly 10-year professional boxing career. He had another world title shot in 2012, losing a 12-round majority decision to Nonito Donaire (27-1) for the vacant WBO 122-pound division championship.

Lopez (34-5, 31 KOs), fighting out of Caguas, Puerto Rico, is a former WBO super bantamweight and featherweight world champion. From 2008 to 2010, “JuanMa” was one of the most feared punchers in boxing, as well as one of its most popular because of his electrifying performances in the ring and engaging personality. During this stretch, he developed into one of the leading pound-4-pound fighters in the working, defeating a Who’s Who of the top super bantamweights and featherweights in the world such as 34-1 Daniel De Leon (TKO1), 33-1 Sergio Medina (TKO1), 54-6-2 Gerry Penalosa (RTD10), 37-1-1 Steve Luevano (37-1-1) and 39-5 Rafael Marquez (RTD8).