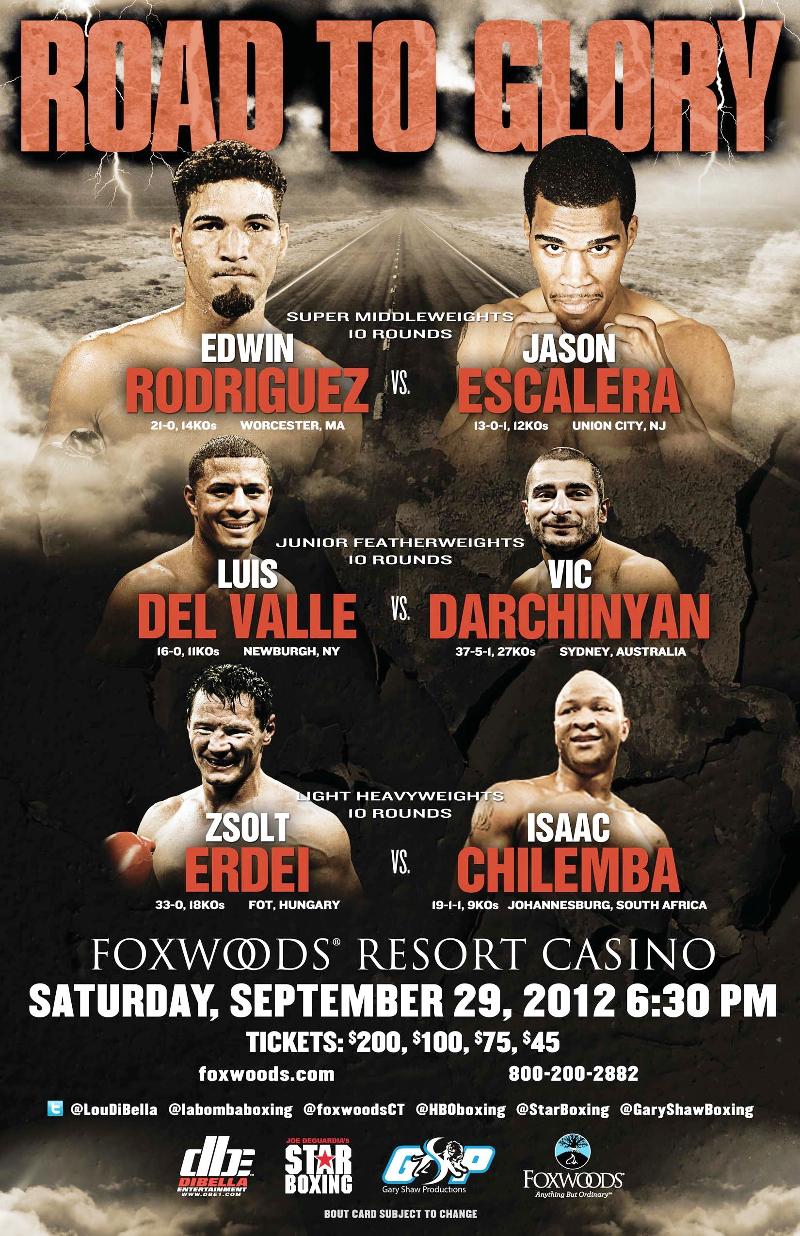 The triple-header is being called “Road to Glory” and the name is quite fitting as each fight carries heavy implications. It is just the second time that the top-rated Rodriguez will see airtime on the network (first in the main event), and it is a first for Escalera, Del Valle, Chilemba, and Erdei. Together the five fighters have a combined record of 102-1-2, with the lone fighter on the card sporting more than one loss being the veteran and former three-time world champion Darchinyan. 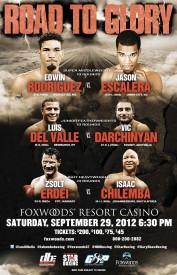 In the televised co-feature, Luis “Orlandito” Del Valle (16-0, 11KO’s) faces his toughest opponent to date when he squares off against former world champion Vic Darchinyan (37-5-1, 27KO’s) for the vacant NABF super bantamweight title. Opening up the televised portion of the card will be former two-division undefeated world champion Zsolt Erdei (33-0, 18KO’s) taking on Isaac Chilemba (19-1-1, 9KO’s) in a key light heavyweight matchup.

Lou DiBella, President of DiBella Entertainment (DBE), has a knack for signing good young talent. DiBella guided the career of Andre Berto from his pro-debut to his first championship. He was also was the only promoter who was willing to take a shot at a then unknown Argentinean, Sergio Martinez. So when this past year’s ESPN Boxing’s Prospects to Watch List, compiled by esteemed writer Dan Rafael, came out, it was little surprise that several DBE-promoted fighters topped the list. DiBella sees championship material and expects big things in the careers from each of the DBE fighters on the card, and for that reason he feels there could be not one, not two, but three separate breakout performances on September 29.

Below is a closer look at each match-up.

The 27-year-old Dominican-native Rodriguez, lives in Worcester, MA, but has been training in Houston with renowned trainer Ronnie Shields for his past three fights. The 2005 United States Amateur Champion and 2006 National Golden Glove Champion has gradually climbed the super middleweight world rankings since turning pro in early 2008. Rodriguez is currently rated as the IBF #4, WBC #4 and WBA #8 super middleweight in the world. Rodriguez is coming off an impressive 10-round unanimous decision over fellow contender Donovan George that was shown live on HBO. Rodriguez hopes an impressive showing against Escalera will propel him into his first world title opportunity.

The Puerto Rican Escalera, also 27 years old, calls Union City, NJ, his home. With devastating power in both hands, Escalera has the ability to end a fight in the blink of an eye. Like Rodriguez, Escalera also turned pro in early 2008, after winning the New Jersey Golden Gloves Light Heavyweight Championship in 2007. The only blemish thus far on Escalera’s record is an eight-round split decision draw against fellow prospect Nick Brinson back on May 18 of this year.

From 2004-2007, while Del Valle was tearing through the amateur ranks, picking up a number of regional and national championships, Darchinyan, already a pro for four years, was the king of the flyweights.

Darchinyan won the first of his three world titles by stopping longtime IBF champion Irene Pacheco on December 16, 2004. Darchinyan defended that title six times, before being knocked out by Nonito Donaire in 2007. By 2008, Darchinyan had moved up in weight to claim the IBF super featherweight title. On November 1, 2008, Darchinyan became the undisputed champion, knocking out Cristian Mijares, to add the WBC and WBA belts to his collection.

From 2004-2009, Erdei ruled the light heavyweight division, defending his WBO title 11 times. In 2009, Erdei moved up in weight to challenge WBC Cruiserweight Champion Giacobbe Fragomeni. Despite giving up 17 pounds, Erdei won a majority decision. Soon after that, Erdei retired. The retirement didn’t last long though, as Erdei returned a year later making his U.S. debut under new promoter DiBella Entertainment. Erdei was scheduled to challenge IBF Light Heavyweight Champion Tavoris Cloud last year, but was forced to withdraw after suffering an injury in training camp. Now Erdei is back, healthy and rested, and ready to make another run at light heavyweight supremacy. In his way stands the IBF #5, WBC #6, WBA #13, and WBO # 14 rated Chilemba.

The 25-year-old South African Chilemba’s lone loss came way back in 2007. The only other blemish on Chilemba’s record is a 12-round split decision draw to highly regarded, undefeated super middleweight contender Thomas Oosthuizen (also promoted by DBE). Chilemba is coming off his most impressive victory to date, a dominant 10-round decision victory over former world title challenger Edison Miranda. Chilemba currently holds six victories over previously undefeated fighters and is confident that September 29 will make lucky number seven.

“Road to Glory” is the highly anticipated HBO Boxing After Dark tripleheader, featuring some of the brightest young fighters in all of boxing looking to continue on their respective paths toward world championships. The card will take place on Saturday, September 29, at the MGM Grand at Foxwoods. The event is promoted by DiBella Entertainment, in association with Joe DeGuardia’s Star Boxing and Gary Shaw Productions. All three bouts will be aired on HBO’s Boxing After Dark beginning at 9:30 p.m. ET/PT