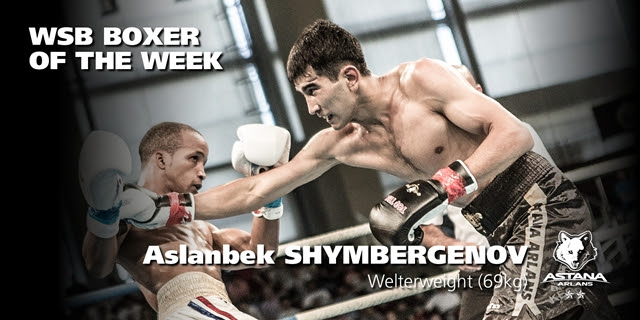 Shymbergenov began his boxing career at the age of 13 after taking inspiration from his older brother who is also a boxer and has been competing at senior level since 2012, in the Light Welterweight category. In 2013, Shymbergenov won a silver medal in the National Championships and a year later secured a gold medal at the Bocskai Memorial Tournament in Debrecen, his first international title.

In the end of 2014, Shymbergenov moved up to Welterweight and was crowned in the Kazakh National Championships. Consequently, Shymbergenov was enlisted in the Astana Arlans Kazakhstan WSB franchise for Season V.

The Kazakh was well prepared for this important final encounter between the Astana Arlans and the Uzbek Tigers’ which would define the top team of Group D. Newcomer Makhmud Gaipov was 2016 Strandja Memorial Tournament winner and with this title has proved to be a very talented boxer. However, Astana Arlans pugilist was able to keep the distance and showed his high boxing skills against the Uzbek in the second and third round.

The fourth round staged great boxing action from both sides but Shymbergenov eventually proved to be the strongest and brought another victory, which earned him the WSB Boxer of the Week 11 recognition.

Team of the Week Week 11

Defending champion Astana Arlans Kazakhstan is Week 11 Team of the Week after its superb performance against the Uzbek Tigers. High on confidence, the team delighted their home fans with a brilliant 4-1 victory.

Punch of the Week Week 11

Lenier Pero, from Cuba Domadores, earned his first WSB Season VI win against Abudusemaiti Abulaiti from China Dragons. The Cuban Super Heavyweight was awarded Punch of the Week 11 after an impressive round 1 punch who gave him a win by KO.

A total of 217 men and 57 women, representing 38 European nations, will be chasing 36 qualification spot for the Rio 2016 Olympic Games (six for women, 30 for men) during the 10 days of competition at the AIBA European Olympic Qualification Event, held in Samsun, Turkey 9-17 April.

There are 10 weight categories for men, ranging from light flyweight up to super heavyweight. The two finalists from each division will receive a quota spot for the Rio 2016 Games, while the two losing semifinalists will take part in a box-off for the third and final qualification place.

The women will compete in three weight categories; flyweight, lightweight and middleweight. The two finalists in each class will win a quota at the coming Olympic Games.

Hungary’s EUBC European Confederation champion and WSB Boxer Balazs Bacskai is a strong favourite for the welterweight class. In addition, Ukraine has named a squad packed full of AOB, WSB and APB talents and home stars Turkey are also expected to feature heavily.

In the women’s draw, despite strong competition, no name stands out quite so brightly as Katie Taylor. Ireland’s lightweight star is the reigning Olympic, World and European champion, unbeaten in all competition since 2011 and widely considered to be the best pound-for-pound female boxer on the planet.

While Taylor starts as favourite in the lightweight class, Nicola Adams, the London 2012 flyweight champion, is the one to watch in her division and Dutch star Nouchka Fontijn takes the honours in the middleweight category.

More information here. Daily results will be published on aiba.org