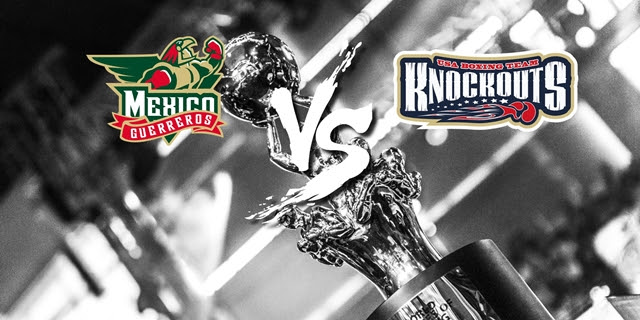 Mexico Guerreros lost to their main rivals USA Knockouts 4-1 in their away match in Miami on Week 4 but their boxers got the perfect revenge in Aguascalientes with an important 4-1 victory and overtook their rivals in the group.

The host franchise was strongly represented in the Heavyweight class (91kg) by Ecuadorian boxer Julio Castillo. His strong performance against USA Knockouts’ National Trials silver medallist Adrian Taylor with impactful hooks in the opening two rounds allowed him to take the lead after six minutes of the fight and bring home the points for his team.

Mexico Guerreros’ Ivan Delgado the Bantamweight class (56 kg) boxer matched against USA Knockouts’ Colombian hope Johan Vargas who made his WSB debut. Debutant Vargas looked nervous in the first round while Delgado was more confident and his punches were faster than the Colombian boxer’s shots. Displaying his skills, Delgado’s dominance was impressive in the last minutes of the bout and he delivered a unanimous points win giving a second success for the home team.

Colombian Jorge Vivas recently qualified for the Rio 2016 Olympic Games in the AIBA American Olympic Qualification Event, made his return to WSB and the Middleweight class (75 kg) boxer suffered strong opposition against USA Knockouts’ Ecuadorian Gustiniano Mina. Mina operated from longer range and his quick jabs were too dangerous for the Colombian boxer who experienced a surprise loss to the USA Knockouts boxer.

In the Light Flyweight class (49 kg), Mexico Guerreros were represented by 19-year-old Elwin Soto. Chasing his first WSB victory, the southpaw rapidly shocked USA Knockouts’ Colombian teenager Hernan Alarcon with his amazing body shots and lethal jabs and the inevitable knockout came in the opening round to the delights of the crowd.

In the fifth and final bout of the night Mexico Guerreros’ new Light Welterweight class (64 kg) hope Roberto Zariñana made his WSB debut against USA Knockouts’ Ringside Tournament winner younger Robby Gonzales. Gonzales was in control of the 1st part of the contest but after Guerreros’ boxer damaging right body punch, the USA Knockouts’ pugilist collapsed to the canvas and could not recover, giving Zariñana the final win of the night, making it 4-1 for the Mexico Guerreros who overtook their rivals in the Playoffs race.

Even with some new faces, the Astana Arlans Kazakhstan delivered a perfect performance against Puerto Rico Hurricanes in Petropavlovsk where the host franchise defeated the Central Americans with an impressive 5-0 win.

The titleholder franchise now has 12 points in Group D and secures its guaranteed place in play-offs behind the newcomer and leader of the Group, the Uzbek Tigers.

Astana Arlans Kazakhstan’s experienced Mardan Berikbayev was matched against a Puerto Rican hopeful, 19-year-old John Ortiz who won the Juan Venegas Tournament last December. The 25-year-old Kazakh boxer operated with quick jabs in the first round and dominated throughout. After his brilliant Season IV and V appearances, Berikbayev has proved that Kazakhstan possesses talented boxers in this light flyweight category.

After Berikbayev’s great opening triumph, Astana Arlans’s bantamweight Nursultan Kochshegulov tried to control his bout over Puerto Rico Hurricanes’ 19-year-old Edgardo Rolon who thrown long distance punches and won surprisingly the 1st round. But Kochshegulov raised his level in the second round and maintained the pressure before the Puerto Rican youngster found his range back in the fourth. Kochshegulov reduced the distance and took the final advantage as his hand was victoriously raised infront of his home crowd giving the hosts a commanding 2-0 lead.

The host heavyweight Yerkin Mukhametzhan was too experienced and claimed his second WSB Season VI bouts against Puerto Rico Hurricanes’ Ivan Rosado by KO after only 74 seconds.

At 3-0 up, Kazakhstan’s new teenage talent Abilkhan Amankul made his WSB debut this afternoon in Petropavlovsk against Puerto Rico Hurricanes’ Raul Sanchez who participated in the AIBA American Olympic Qualification event last week in Buenos-Aires. The Astana Arlans southpaw, powered through the second round to take the lead and earn the judges’ decision and give an unassailable 4-0 lead.
Astana Arlans Kazakhstan’s team captain and two-time WSB Champion Samat Bashenov added another victory to the remarkable evening as the injured Puerto Rico Hurricanes’ Jean Carlos Rivera could not compete thus the home franchise inflicted a 5-0 whitewash on the Puerto Rico team.