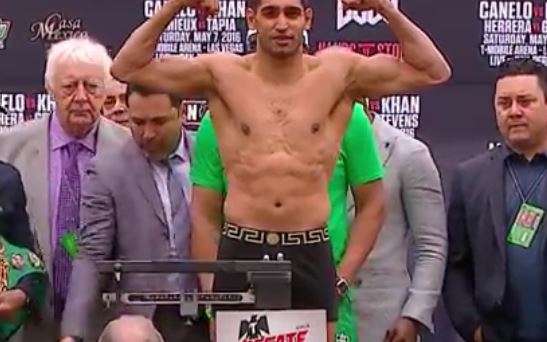 Amir Khan has vowed to do British boxing proud by becoming the latest world champion during a golden era for the sport in the country. 29-year-old Khan looked in great shape as he hit the scales bang on the 155-pound limit ahead of his fight with Canelo Alvarez.

The Boltonian, who starred for Britain during the 2004 Olympic Games says he will be out to bring home another belt to a nation that is experiencing real success in the sport.

Here’s what Khan had to say:

“British boxing is on such a high right now and I want to add to that by beating Canelo.

“We have 11 world champions and we’re really experiencing something very special in the country. I’m going out there on Saturday night to add to that and make British boxing and sport proud.

“This victory will be for the UK and all the fans. The fight really has a unique feeling about it, something similar to the Olympic Games in 2004 when I made it to the final, and I hope to do the country proud again.”

A significant number of British fans have travelled over to the fight to voice their support for Khan in what will be a mostly Mexican and pro-Canelo crowd who are celebrating the Cinco de Mayo holiday weekend.

A host of top celebrities and stars are set to be in attendance for the fight, including British boxing legend Lennox Lewis, who believes a Khan victory will allow him to cement his place amongst Britain’s best-ever.

“This is the greatest era for British boxing and this fight allows Amir to take his rightful place among all the stars. He has been waiting for this opportunity for so long, he’s had his ups and downs and now is his time,” said Lewis.

“I really believe he has a great chance of winning because of his movement and his speed. This is an important fight for Amir and British boxing so I would call on everyone to support him and get behind him.

“He’s come into the lions den to take those world title belts and you have to have nothing but respect for that. It’s going to be a great fight and one I’m really looking forward to,” he said.

Mexican superstar Canelo also made the weight at 155-pounds and will be out to ensure that Khan does not upset the odds with victory this weekend.