Anthony Joshua declared himself the “comeback king” as he came face-to-face with Oleksandr Usyk ahead of their world heavyweight title rematch on August 20 in Saudi Arabia.

Usyk and Joshua engaged in a lengthy staredown following the opening press conference in Jeddah on Tuesday, as they met for the first time since their first outing in September in which Usyk ripped away the WBA ‘super’, WBO, IBF and IBO titles from the Brit with a dominant points win at the Tottenham Hotspur Stadium.

‘AJ’, who was alongside new trainer Robert Garcia insisted that his goal remains becoming undisputed champion, with WBC champion, Tyson Fury holding the other major title in the division, although ‘The Gypsy King’ has maintained that he is retired.

“The fight with Usyk he bust my a** for some rounds and I have to take that defeat like a man as well.

“But, I hold myself accountable. I’m someone who can admit when I’m wrong and hold my head high when I’m right and in the fight in September I was wrong and he was right and simply, I have to reverse that role [on] August 20.”

Joshua returns to the country that staged his rematch against Andy Ruiz Jr in December 2019, in which he avenged his only other professional loss in a near shutout points victory.

The Watford man, who activated his rematch clause to face the Ukrainian again, says he recognises the second opportunity he has to regain the titles.

“The great thing is I’ve got a second chance.

“What got me into boxing in the first place, [was] when I was a youngster I got in a little bit of trouble now and again and I was blessed with a second chance and I found boxing and I took it with both hands.

“So, if you know me and a lot of my story, you know I’m the comeback king.

“You can put me down, but it’s difficult to keep me down, because I always keep my spirits high.” 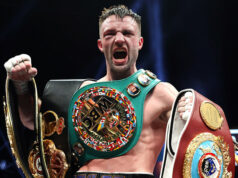