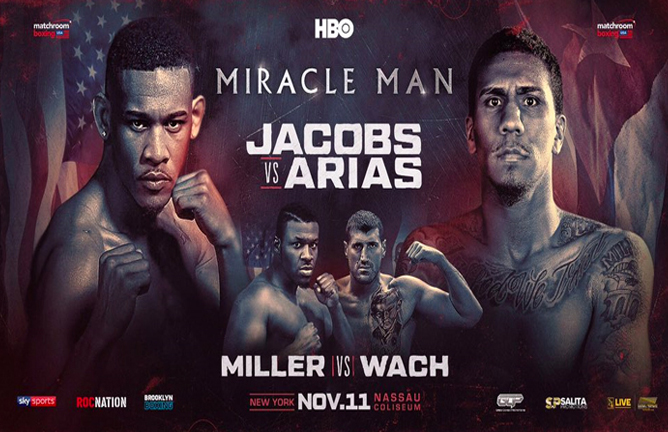 Luis Arias has ‘declared war’ upon his opponent, Daniel Jacobs, ahead of their clash this Saturday night on HBO Championship Boxing at the Nassau Coliseum, New York.

Unbeaten Arias, (18-0, 9 KO’s) promises to make a statement by beating Jacobs and knocking him out.

“I am very well trained, strong, ready for a war. Jacobs is underestimating me, many people do not know me, he does not know me, they think it will be easy, but, in reality, it is going to be a war,” Arias told ESPN Deportes.

“This is a great opportunity. With a knockout and a victory I’m going to position my name in a high position in the division and I’m ready. “I want my name to sound out right next to Canelo, Golovkin. I know that a victory will give me the possibility to fight with them.”

The 27 year old aims to be aggressive and bring the fight to Jacobs, believing the new Matchroom member doesn’t like a war.

“I am going to be very aggressive. Jacobs does not like to fight, he likes to run and doesn’t like wars. I am young, I have young legs, good defence, I am very aggressive. The fight will be very difficult for him.”

“The plan is not to go 12 rounds. When I hit him hard on the jaw, (Jacobs) will know that he is in for a difficult fight and I will knock him out. I’m not missing anything.”

“The work has been done, we are ready. I only have to make the weight, that’s the last thing we do and [we’ll be] ready for war.”

Jacobs, (32-2, 29 KO’s) will be looking to overcome Arias as Matchroom’s Eddie Hearn wants the American to go on to face the winner of the WBO Middleweight title fight between Billy Joe Saunders and David Lemieux, leading onto a fight with either GGG or Canelo.

Jacobs said when speaking to ESPN.com, “There is no next target, if I let this guy slip through the cracks, he can mess it all up for me. And then the whole Golovkin, Canelo future plans would be shattered. So I really can’t look past this guy.”