1890s: The Reigns of Corbett & Fitzsimmons 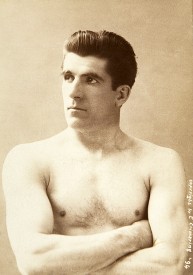 James J. Corbett, with his sartorial splendor and scientific approach to the Sweet Science, revolutionized the sport in both its application and perception.  By his example and under his guidance, boxing became considerably more than jumped-up barroom brawling; it metamorphosed intothe manly to the gentlemanly art of self-defense.  It was no accident that the press dubbed him “Gentleman Jim”.

If John L. Sullivan is the glorification of the bare-fisted slugger, Corbett is emblematic of the new Marquess of Queensberry Rules, introduced in 1889.  The use of gloves, as the new rules required, called for a more sophisticated understanding and application of strategy and tactics, and greater quickness of hands and feet.  Standing stock-still like a nodding-off rhinoceros and smashing bare fists into one’s equally stationary opponent no longer cut the mustard.

Corbett and his newfangled way of fighting came to public attention and acclaim in 1890 when he bested the unquestionably tough but hopelessly dated Jake Kilrain.  He solidified his reputation the following year when he fought a 61-round draw with one of the best heavyweights of his time, Peter Jackson.  Next up:  Sullivan’s Heavyweight Championship of the World.

Sullivan took the title from Paddy Ryan in 1882, the last time the championship was won under the Revised London Prize Ring Rules. Over the next decade, the “Boston Strong Boy” defeated any and all who dared challenge him.  From early 1884 to late 1886, for example, Sullivan scored 14 victories.

But following his 1889 defeat of Kilrain (the last hurrah of the old rules, to be replaced by those of the Marquess of Queensberry later the same year), Sullivan abjectly surrendered to an excess of food, drink, and carousing.  The man who once bathed in salt water to toughen his skin had now “increased his stomach’s circumference,” as Nat Fleischer put it.

Following his win over Kilrain, Sullivan spent more time on stage than in the ring.  Indeed, in the three years from the Kilrain to the Corbett matches, Sullivan engaged in only a few exhibition bouts.  Though characteristically confident, he was ill-prepared to face “Gentleman Jim” on September 7, 1892.

The fight, which took place at the Olympic Club in New Orleans, Louisiana, went 21 rounds before Corbett kayoed his always gutsy, but anachronistic and corpulent, opponent.  The energy of youth, in combination with speed and sophisticated strategy, proved more than a match for Sullivan’s archaic toeing the line and putting up one’s dukes. Corbett was now the first in a long line to win the heavyweight championship according to the Queensberry rules and the wearing of gloves.

Rather like his predecessor, Corbett caught the acting bug and didn’t fight again until 1894 when he stopped Charlie Mitchell in the third round. Corbett then retired and handed his title to Peter Maher. 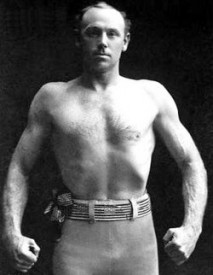 No one recognized the Irishman as champ, least of all Bob Fitzsimmons, who knocked him out in the first round of their 1896 bout.  But Maher was a mere formality; Fitzsimmons knew that he would never be acknowledged as Heavyweight Champion of the World unless and until he defeated “Gentleman Jim”.

A born Englishman, but raised in New Zealand, Fitzsimmons first fought in America in 1890, kayoing Frank Allen in the first.  He went on to defeat Billy McCarthy, Arthur Upham, “Nonpareil” Jack Dempsey (thus winning the middleweight crown), and Abe Coughle, among many others.

Following his first defeat of Maher, in 1892, Fitzsimmons won 28 of his next 30 fights.  One resulted in a draw, the other in a loss by disqualification. In the latter bout, with Tom Sharkey, Fitzsimmons was robbed of his win by the grossly unfair decision of the referee — Wyatt Earp.

No longer able to resist the siren song of the comeback, Corbett agreed to face Fitzsimmons at the Race Track Arena in Carson City, Nevada, on March 17, 1897. He should have plugged his ears — Fitzsimmons knocked him out in the 14th with his freshly minted “Solar Plexus Blow”.

Third in a row of actor wannabes, Fitzsimmons didn’t fight for two years following his gaining of the heavyweight crown (save for a second round KO of Lew Joslin three months after his victory over Corbett).  Finally, on June 9, 1899, Fitzsimmons entered the ring against the “Boilermaker” — James J. Jeffries.