Not only is this ridiculous fight even on the schedule, but you’re also going to have to buy it on HBO Pay-Per-View. Or, on the plus side, if you don’t want to waste your time with it, then you can just opt not to buy it!

There are of course several things wrong with this:

What follows is the rest of the official Golden Boy release and hype: 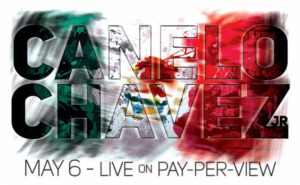 “I’m excited to announce my fight against Julio César Chávez, Jr. and confirm that I will be prepared, like I’ve been throughout my career, to give a great fight,” said two-division World Champion Canelo Álvarez. “I want to remind you that when two Mexican fighters face-off, a spectacular show is guaranteed, and I can assure you that May 6 will be no exception especially during the Cinco de Mayo festivities.”

“Cinco de Mayo and Mexican Independence Day in September are important dates for us Mexicans, and I’m expecting a great night for boxing and the whole world,” Canelo continued. “Don’t miss this special event live on HBO Pay-Per-View®. We’ll soon be announcing where the fight will be held.”

“I dedicate this fight to Mexico,” said Julio César Chávez, Jr. “I’m going to win, but my country will too because this is the fight that boxing needs.”

Álvarez was last seen in the ring Sept. 17, 2016, knocking out the previously undefeated WBO junior middleweight champion Liam Smith in front of more than 51,000 fans in Dallas, Texas. Chávez was last in action Dec. 10, 2016, when he secured a unanimous decision victory over highly regarded German fighter Dominik Britsch in Monterrey, Mexico.

“Boxing has been searching for a fight to draw the casual fan back to our sport, and Canelo versus Chávez, Jr. is just that fight,” said Oscar De La Hoya, CEO and Chairman of Golden Boy Promotions. “Canelo, the biggest star boxing, will take on not only a former world champion in Julio César Chávez, Jr., but the son of the biggest star in the history of boxing in Mexico. Add in 98 victories and 66 knockouts between these two superstars along with a Cinco de Mayo fight date, and you have a can’t-miss battle.”

“Canelo vs. Julio César Chávez, Jr. is one of the premier and most compelling matchups in boxing today,” said Tony Walker, Vice President of HBO Sports. “May 6 has all the makings of an extraordinary event as these two Mexican warriors will lay it all on the line to show who is the best on Cinco de Mayo weekend. It will be an evening that every fight fan will want to experience live on HBO Pay-Per-View®.”

Canelo vs. Chávez, Jr. is a 12-round fight presented by Golden Boy Promotions and sponsored by Tecate, BORN BOLD. The event takes place on Saturday, May 6 and will be produced and distributed live by HBO Pay-Per-View® beginning at 9:00 p.m. ET/6:00 p.m. PT.