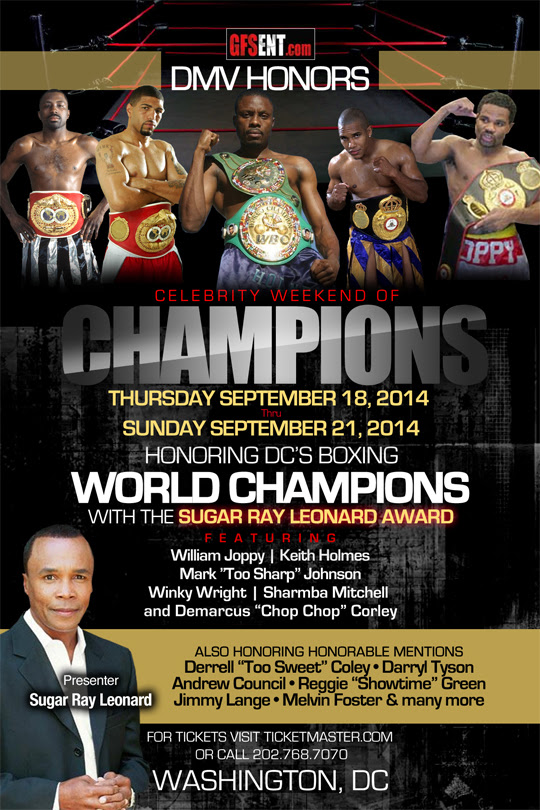 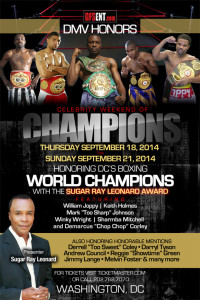 Other honorees include Derrell ‘Too Sweet’ Coley, Darryl Tyson, Andrew Council, Reggie ‘Showtime’ Green, Jimmy Lange, Melvin Foster and a host of other acknowledgements in the boxing community.

The recognition of DC’s legendary boxers has been overlooked for years but GFS Entertainment Group saw fit to honor the accomplishments of the five (5) World Champions and their fifteen (15) World Boxing Titles. This event will fuse DC’s boxing, comedy, music, philanthropy and more with an endless list of creative production and fabulous events.

The DMV Honors Celebrity Weekend of Champions will kick off the weekend with an intimate welcoming reception, meet & greet and press conference. Media, sponsors, fans and attendees will have a chance to get a taste of what’s to come for the remainder of the weekend.

The DMV Honors Celebrity Weekend of Champions Golf Tournament will take place at a luxurious Country Club at Woodmore. A host of celebrities will play 18 rounds of golf while enjoying a great day of golf.

The DMV Night of Champions Awards Gala will be the highlight of the weekend which will be held at Warner Theatre. The red carpet black tie awards gala will feature Musiq Soul Child with special guest performances and more. The event will also feature a comedy roast hosted by Eddie Bryant with a number of DC’s hometown All Star comedians such as Joe Clair, Billy Da Kid and more. The comedians will give a hilarious performance while roasting the boxing champs. The awards gala will honor the elite of DC boxing while recognizing one of the greatest from DC, Sugar Ray Leonard and the champions will receive the DMV Honors Sugar Ray Leonard Award.

DMV Honors Pro Am Weigh In & Pro Am Boxing Match

There will be a press conference and weigh in prior to the boxing match to maintain the necessary professional exposure deserved for championship belts. The boxing match will grasp local, regional and national attention as we strive to produce one the best boxing events that not only highlights and supports our local talent but also national pro & am boxers. DC’s former boxing world champions will then acknowledge and pass the glove onto the city’s upcoming world champions. This event will unite boxers, boxing fans of all generations and also ignite the growing boxing scene in DC.

The DMV Honors Casino Royale After Party will take place following the boxing match. This event will feature a night of charity and fun while attendees enjoy Vegas style casino games such as Black Jack, Poker, Roulette, and Craps alongside entertaining Showgirls and more while witnessing special guest performances and more. The finale will be a great way to conclude not only a notable boxing match but also a celebration for a fun filled successful weekend.