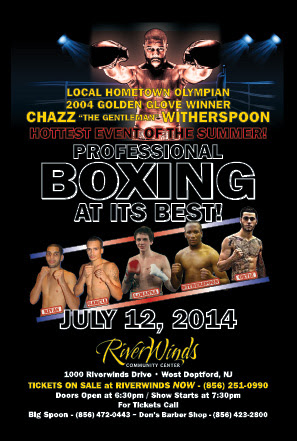 On Saturday, July 12, heavyweight Chazz “The Gentleman” Witherspoon returns to the ring after a two-year absence when he takes part in an 8-round bout at the Riverwinds Community Center in West Deptford, New Jersey.

Witherspoon (30-3, 22 KO’s) of nearby Paulsboro, New Jersey established himself as one of the top American Heavyweights as the St. Joseph’s University graduate won his first twenty-three bouts with wins over the likes of Michael Alexander (11-0), Talmadge Griffis (24-6-3), Jonathan Haggler (18-1) before suffering his 1st defeat to future two-time world title challenger Chris Arreola via controversial disqualification.

Witherspoon went on to win three win a row which was highlighted by an entertaining 8th round stoppage over Adam “The Swamp Donkey” Richards (21-1). That fight was voted Ring Magazine’s 2008 Heavyweight Fight of the Year. Witherspoon then dropped a fight to future two-time world title challenger Tony Thompson.

Witherspoon went on to score 4-consecutive knockouts which included a devastating 3rd-round destruction over Tyson Cobb (14-2).

Witherspoon is looking ti get back into the win column and facilitate his championship run following his 3rd-round stoppage defeat to then undefeated prospect Seth Mitchell on April 28, 2012 in a bout where Witherspoon had Mitchell badly hurt in several occasions.

“I feel good and rejuvenated after the layoff,” said Witherspoon.

“I haven’t been out this long because I wanted to. I had several fights fall through, so I decided to start my own company and do my own shows and I can’t wait until July 12 to put on a great event not far from where I live,” said Witherspoon.

Witherspoon’s opponent will be named shortly.

In the six-round co-feature, undefeated Middleweight Thomas “Cornflake” LaManna will be back in action. LaManna of Millville, New Jersey has a record of 14-0 with 7 knockouts has been raising the level of competition and has past each test with flying colors.

LaManna is coming off a solid performance when he scored a 8-round unanimous decision over Ashandi Gibbs on April 12 in Atlantic City. Lamanna’s opponent will be announced.