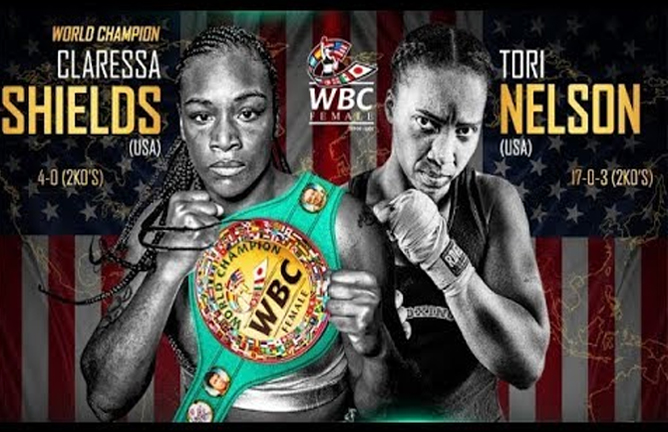 Claressa Shields dethroned previously unbeaten Nikki Adler Aug. 4 on SHOWTIME to pick up the WBC and vacant IBF titles less than one year after she became the first American boxer to capture back-to-back Olympic gold medals. The 22-year-old native of Flint, Mich., returns to face Nelson, a seven-year veteran with seven times the professional ring experience.

“I’m truly excited to have the chance to demonstrate my skills against an opponent the caliber of Tori Nelson,” Shields said. “I’m honored to be headlining the first ShoBox of 2018, and I know January 12 will be a great night for the fans. This will be the beginning of a historic year for me and for women’s boxing.”

Nelson (17-0-3, 2 KOs) won a middleweight world championship in 2011 and owns wins over previously unbeaten Alicia Napoleon and Mia St. John. The 41-year-old Ashburn, Va., native looks to capture her second world title in a showdown with the fastest rising star in women’s boxing.

“Ever since Claressa turned pro, I have wanted this fight,” Nelson said. “She’s young and talented, but my experience will make the difference. Since I became a boxer, I have dreamed of being in big fights on television. I am confident that I will win this fight and remain undefeated. And I plan to retire as an undefeated world champion.”

“Claressa’s determination to challenge the best available contenders shows why she is one of the most accomplished fighters in the sport today,” promoter Dmitriy Salita said. “This is a great matchup and I am confident that we will witness another memorable performance.”

Said Gordon Hall, Executive Producer of ShoBox: The New Generation: “Claressa Shields is a star both in and out of the ring who possesses all the intangibles to become the face of women’s boxing. In just four professional fights, she is already unified champion at 168 with plans to conquer the 160 and 154-pound divisions. Tori Nelson is undefeated, a former champion, and represents what should be the toughest test of Claressa’s young career. Only time will tell, but I don’t know if there is any fighter in the world who can stop Claressa Shields.”

Shields compiled an amateur record of 77-1 and won her first Olympic Gold when she was only 17 years old in the inaugural women’s boxing competition at the 2012 London Games. She won a second gold medal at the 2016 Olympics in Rio and turned professional three months later.

In March 2017 in Detroit, Claressa Shields stopped Hungary’s Szilvia Szabados in four rounds in the first women’s main event in premium television history. Shields returned to headline her second ShoBox telecast in August, knocking out Adler in the fifth round to become unified champion in just her fourth professional fight. With the win, Shields became the 70th world champion in the history of the prospect developmental series.

Active in her community, Shields advocates for several social issues and serves as an inspirational figure in her hometown of Flint.

Nelson turned professional at the age of 29 and won the WBC 160-pound title in just her fifth professional fight. She twice fought to a draw in middleweight world title bouts with Teresa Perozzi.

The high-pressure Nelson is one fight removed from a unanimous decision over the previously unbeaten Napoleon. She is fresh off a second round knockout of Latashia Burton in her first hometown fight in Ashburn, Va.

Undercard bouts for the ShoBox telecast will be announced in the coming weeks.