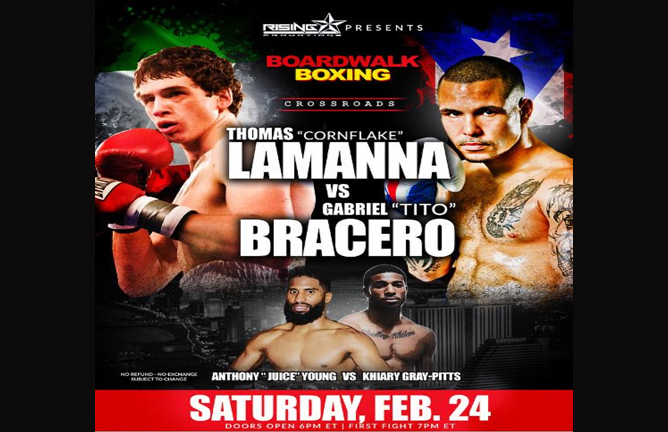 Thomas “Cornflake” LaManna will headline the inaugural Boardwalk Boxing series when he takes the battle-tested veteran Gabriel Bracero in a ten-round welterweight bout for the WBC Fecarbox welterweight title on Saturday, February 24th at The Showboat Hotel in Atlantic City.

The bout will be the main event of a huge night of boxing promoted by Rising Star Promotions.

LaManna, 26, of Millville, New Jersey has an impressive mark of 25-2 with nine knockouts.

LaManna, who has consistently performed as a headliner in front of sell out crowds, is eager to thrill fans and potentially notch the biggest win of his career.

“This is a crossroads fight. He needs a win over me to stay relevant, and I need a win over him to be taken serious,” said LaManna. “Bracero has fought some top guys. His losses have been to world champions and Gold Medal winners. He has been around the block.”

“I want to start 2018 with a good test. I want to test myself. When I go through a hard camp, dieting and focusing, I want it to be worth it.”

“This should be a great atmosphere as he is a popular fighter like myself. A win over him will give me an opportunity as I will move up in the ratings. This is a make or break year, and a win will put me in there with other contenders.”

LaManna will celebrate his 7th year as a professional, as he has wins over Kendal Mena (20-3), as well as winning the WBC Silver Latino and WBC FECARBOX Welterweight titles with a ten-round unanimous decision over rugged George Sosa.

In his last bout, LaManna defended the WBC FECARBOX title with a ten-round unanimous decision over Samuel Amoako on November 28th in Atlantic City.

This will be LaManna’s 18th fight in Atlantic City.

Gabriel Bracero of Brooklyn, New York has an impressive mark of 24-3 with five knockouts. He will be 38 on February 14th, while yet has faced and defeated some impressive foes over his 17 year-career.

“This will be a good fight. He is a tough kid. He is tall, and I will get into the best shape possible,” said Bracero.

“I am excited to finally be fighting in Atlantic City. I have family there, plus my fans from Brooklyn can drive there and spend a nice weekend. ”

“This fight is a true crossroads battle. He is looking to make his name off of me, and I am focusing on winning his WBC Fecarbox title. A win will get me back into the bigger fights.

In addition to LaManna and Bracero, a terrific co-feature bout that will see Anthony “Juice” Young of Atlantic City battling Khiary Gray of Worcester, Massachusetts.

The seven-year professional will be looking for his eighth consecutive victory. The Atlantic City favorite has a quality win over Jose Javier Claderon (4-1), and will be making his 12th start in his hometown.