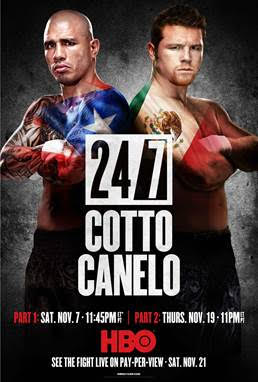 “The intensity, rivalry and significance of Miguel Cotto of Puerto Rico versus Canelo Alvarez of Mexico will make for great storytelling in this all-new edition of ‘24/7’,” noted Bernstein. “This is a mega-fight that will generate tremendous interest, and we look forward to documenting the multiple storylines generated by this red-hot showdown.”

Cotto vs. Canelo 24/7 will provide exclusive behind-the-scenes access, along with in-depth interviews, as the fighters prepare for their first encounter. The 34-year-old Cotto (40-4, 33 KOs), from Caguas, Puerto Rico, is the reigning lineal world middleweight champ. His formidable foe is the 25-year-old Canelo Alvarez (45-1-1, 32 KOs), of Guadalajara, Jalisco, Mexico, who has turned back an impressive list of challengers.

Making his fifth “24/7” appearance, Cotto is working with Hall of Fame trainer Freddie Roach at the famed Wild Card Gym in Hollywood, Cal. Canelo once again is holding camp in San Diego with his seasoned trainer, Eddy Reynoso.

Canelo defends titles against Yildirim in Miami on Feb 27